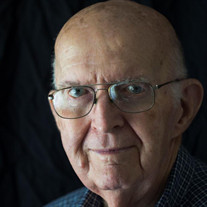 Harvey Lamoyne Smith was born May 26, 1930 in Marlow, OK. He passed on January 10, 2022. After graduating from Central State University, Harvey married Mary G. Rabon in 1951. Following more than sixty-six years spent happily together, Mary predeceased him. He is survived by his two sons, Howard Smith (Susan) of Corpus Christi and Greg Smith (Terri) of Albuquerque and his four grandchildren, Audrey Nihart (Alex) of Albuquerque, Sean Smith (Yandee) of Houston, Carra Miller (Ryan) of Corpus Christi, Naomi Smith (Alex) of Chicago, and his niece Paula Robison (Tim) of Muskogee. Harvey was devoted to his family, to East Cross Methodist Church (including serving as its Treasurer for many years) and to Boy Scouts. He was an Assistant Scoutmaster, Scoutmaster, and recipient of the organization’s Silver Beaver Award and Vigil Award. He organized, completed, and enjoyed projects at the Scout Camp for many years. He also worked with Habitat for Humanity. He was proud of his service in the Army Reserve. He and Mary enjoyed many years of square dancing and camping with friends. He and Mary were frequent participants at the 55 Plus Activity Center. He had a passion for hot sauce, a slow-starting, deep laugh that shook his whole body (no one could resist joining in), a green thumb (especially for blackberries, which he and Mary made into their famous blackberry cobblers), a creative streak in designing and building things from toys for his grandchildren to decorations, a knack for communicating much in few words, and an eye for detail in all things that he did. In his later years, he patiently took care of Mary through her final illness. Harvey was good and kind. He was loyal and valued service to others and his community. He will be greatly missed by all those whose lives he enriched. In lieu of flowers, the family requests donations be made to the 55 Plus Activity Center Memorial fund.

The family of Harvey Lamoyne Smith created this Life Tributes page to make it easy to share your memories.