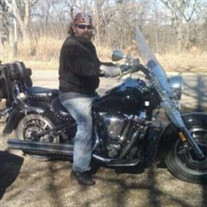 Harry Owens, 61, of Barnsdall, OK, departed from life on Saturday, June 13th after a long battle with idiopathic pulmonary fibrosis (IPF) and cancer. Harry was born April 7, 1959 in Pawhuska, OK, to John Quincy and Virginia Owens. He was eleven of twelve children, the first of the twelve born in a hospital. Harry graduated from Barnsdall High school in 1977. He went to work for the Coca Cola bottling plant in Bartlesville, OK for a short time then went to work in the oil field. During this time he met and married the love of his life of 40 years, Claudette Owens. He owned and operated Owens Salvage & used vehicles. His primary career was when he worked in the oilfield going from pulling unit hand all the way to pumper ending his career at Flagship Oil. Harry enjoyed spending time with family and friends. Like many other Owens adventurers he enjoyed his motorcycles and fast cars. Namely his favorites were his Bandit, Midnight Star Silverado, and Triumph motorcycles. Let's not forget his '99 Corvette and his (sports car truck) his Duramax. He enjoyed music concerts with his wife Claudette and his sister Amey and brother in law Larry Watters. He liked to play Casino games both in casino and online. He loved hanging out telling of those adventures. He had a big heart and a great sense of humor. He leaves behind his wife Claudette, four children and their spouse; Crystal and Jason McNulty of Tulsa, Daniel Owens of Barnsdall, Bruce and Kelly Owens of Barnsdall, Samantha and Chris Taggart of Bartlesville. He also leaves behind ten grandchildren; Marley, Kylee, Liston, Mali, Zaylee, Titan, Frankii, Thomas, Dagen, and Annaleigh. Surviving siblings include; Barbara Taylor of Barnsdall, Johnnie Mae Roberts of Wynona, Iona Huddleston of Tonkawa, Bill Owens of Tulsa, Danny Owens of Bartlesville, Ruby Martin of Sand Springs, Wanda Todd of Joplin, JoAnn Selvidge of Barnsdall, and Amey Watters of Bartlesville. Harry also leaves behind several nieces, nephews, great-nieces, great-nephews, several in-laws and many friends like family. Harry was preceded by his parents John Quincy and Virginia Owens, and his brothers Jerry and Benny Owens. Harry was a loving husband, father, grandfather, brother, uncle, and friend to many. He will be missed by all who knew him. We will have a memorial service at Lighthouse Family Worship Center Thursday 1pm. Harry will be laid to rest at Ethel Reese Cemetery East (new) in Barnsdall following the memorial. Funeral Services are provided by Stumpff Funeral Home in Barnsdall.

Harry Owens, 61, of Barnsdall, OK, departed from life on Saturday, June 13th after a long battle with idiopathic pulmonary fibrosis (IPF) and cancer. Harry was born April 7, 1959 in Pawhuska, OK, to John Quincy and Virginia Owens. He was eleven... View Obituary & Service Information

The family of Harry James Owens created this Life Tributes page to make it easy to share your memories.

Harry Owens, 61, of Barnsdall, OK, departed from life on Saturday,...