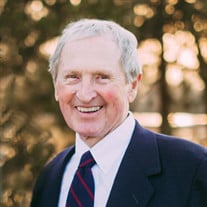 Harris A. (Del) Dutcher, Jr., 80, of Bartlesville, died on June 11, 2020, after a battle with cancer. Del was born on July 17, 1939, in Hobart, Okla., to Harris A. Dutcher, Sr. and Louise (Sholl) Dutcher. Del honorably served on active duty in the United States Marine Corps from 1957 to 1960. On December 29, 1964, he married Dona Beesley. They raised three children: Mike, Brandon, and Christy. Del received a bachelor’s degree from the University of Oklahoma where he was a member of the Sigma Chi fraternity. He worked for a few years in Tulsa as a banker, but Del was an outdoorsman at heart. (Though he had started on the basketball and baseball teams for the College High Wildcats, he didn’t play football because it interfered with hunting and fishing.) So he moved to Bartlesville, built more than 20 lakes and ponds, and began a decades-long career in commercial catfish farming. Del is survived by his wife, Dona; his son Michael Dutcher of Bartlesville (married to Chris); his son Brandon Dutcher of Edmond, Okla. (married to Susie); and his daughter Christy McPhail of Bartlesville (married to Keith). He is also survived by his grandchildren: Andrew Dutcher, Jane Bartley, Betsy Dutcher, Lincoln Dutcher, Lillie Dutcher, Mary Margaret Dutcher, Jack Henry Dutcher, Oliver Dutcher, James Teague, Marybeth Patterson, Grace McPhail, Blake McPhail, Madison McPhail, and Parker McPhail. He is also survived by five great-grandchildren: Cohen, Evie, Easton, Jack, and Scottie. Del is also survived by two brothers: Bill Dutcher of Norman, Okla., and Phil Dutcher of Tulsa. He was preceded in death by his parents, and by his grandchildren Tyler Teague and Anne Marie Dutcher. Visitation will be on Tuesday, June 16 from 9:00 AM to 8:00 PM at Stumpff Funeral Home in Bartlesville, with the family receiving guests between 6:00 PM and 8:00 PM. Funeral services will be held Wednesday, June 17 at 10:00 AM at First Wesleyan Church in Bartlesville. Interment will follow at Memorial Park Cemetery in Bartlesville directed by the Stumpff Funeral Home & Crematory. Pallbearers will be Michael Dutcher, Brandon Dutcher, Keith McPhail, Andrew Dutcher, Lincoln Dutcher, James Teague, Jack Henry Dutcher, Blake McPhail, Parker McPhail, and Oliver Dutcher. Memorial contributions to support Christian missionaries may be made in Del’s memory to Wesleyan Global Partners, 1776 Silver Lake Road, Bartlesville, OK 74006.

The family of Harris A. (Del) Dutcher created this Life Tributes page to make it easy to share your memories.

Send flowers to the Dutcher family.