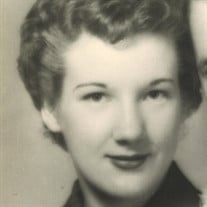 Greta Diane Griffin passed away at 10:32 AM on Sunday, March 13, 2022, at her home in Bartlesville, with her daughters and son-in-law by her side. Funeral services will be held at 11:00 AM on Friday, March 18, 2022, in the First Baptist Church of Copan, Oklahoma, with Rev. Michael Leskowat officiating. Interment will be in the Dewey Cemetery under the direction of the Stumpff Funeral Home & Crematory. Greta was born in Bartlesville, Oklahoma on June 6, 1938, to Daniel Trotter and Paulene (Griggs) Trotter. She grew up in the Copan area graduating from Copan High School. She married Ray Dwight Griffin on March 15, 1957. Greta and Ray made their home in Copan until Ray’s passing in 2012. She was a lifelong homemaker in addition to working for Phillips Petroleum Company for approximately 10 years to help pay for the building of their dream home on their Copan farm. Greta was a passionate gardener. She loved working in her vegetable and flower gardens, especially growing her beautiful roses. Many would say that she could plant a stick in the ground and it would grow. She enjoyed canning and preserving her fresh vegetables. Greta also enjoyed sewing for herself and her daughters. Other favorite past times included crappie fishing and camping at nearby lakes. Greta is survived by two daughters Valari Pauline Estes of Copan and Stefani Diane Summerlin and her husband Dale of Bartlesville; two brothers Ken Trotter and Mark Trotter; four grandchildren Kristopher Johnson, Emily Boggs and her husband Rex, Layne Summerlin and his wife Madison and Spencer Summerlin; four great-grandchildren Haydn Johnson, Silas Johnson, Eli Boggs, and Henry Summerlin, several nieces, nephews and two lifelong friends Barbara (Falleaf) Wallace and Margie (Foreman) Swanson and many close friends. Greta was preceded in death by her husband, her parents, four brothers Danny Trotter, Ron Trotter, John Trotter, and Dean Price.

Greta Diane Griffin passed away at 10:32 AM on Sunday, March 13, 2022, at her home in Bartlesville, with her daughters and son-in-law by her side. Funeral services will be held at 11:00 AM on Friday, March 18, 2022, in the First Baptist Church... View Obituary & Service Information

The family of Greta Diane Griffin created this Life Tributes page to make it easy to share your memories.

Send flowers to the Griffin family.