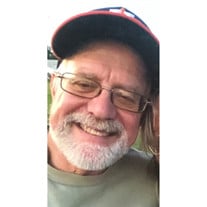 Gregory Allen Wentworth, 63, of Skiatook, Oklahoma passed away on January 22, 2022 in Owasso, Oklahoma.  He was born February 19, 1958 in Houston, Texas to Earl and Cornelia (Bednar) Wentworth.  Greg received his early education in Houston Public Schools and was a graduate of Bellaire High School in 1977. He attended Blinn college in Brenham, Texas. Greg spent the summers helping his grandparents on their family farm in central Texas.  Greg moved to Oklahoma where he married Shelley Wooden Roberson on July 16, 2011.  Even though he was born and raised in Houston, Greg loved the pace and community of small town living.  His expertise was as a senior technician in the automotive industry. Greg took great pride in his work treating each vehicle as it was his own.  Most customers would wait on Greg because of his work and not go to anyone else.  His love for cars started at an early age when he restored a 1956 Chevy Truck. Greg enjoyed military history, especially WW2; his son Bryan arranged a private tour of the USS Enterprise in Virginia.  He loved WW2 airplanes especially the B-17 "Memphis Belle".  He took a special birthday flight in a B-17.  Greg also toured the Battleship Texas and the WW2 Museum in New Orleans.  Family was very important to Greg, throughout his life others have said he was an excellent teacher and friend. He is survived by his wife Shelley, mother Cornelia Wentworth, his sister Karin French and husband Gary, children: Melanie Jenkins, Bryan Wentworth, Aaron Wooden, Lauren Taff and husband Jarett, Blake Roberson, his sister in law Stacey Imler Hightower and nephew Skylar Hightower, grandchildren: Hunter, Holly, Cole, J.W. and Hazel. He was preceded in death by his father Earl Wentworth on November 11, 2021 and mother in law Joyce Imler Moursund.

The family of Gregory Allen Wentworth created this Life Tributes page to make it easy to share your memories.

Send flowers to the Wentworth family.