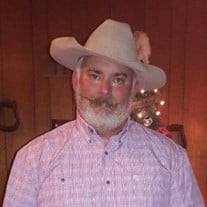 Gregory Scott Thomison, 53, of Dewey, Oklahoma died on Friday, September 4, 2020. He was born on September 3, 1967 to parents George Franklin Thomison and Linda Nell Brady Thomison in Tulsa, Oklahoma. Growing up, he attended Kaw City Elementary School and Shilder High School. He served in the United States Army as a combat engineer from 1988 to 1991. Following his military service, Gregory worked as a truck driver and as a car salesman. Gregory married Karen Mauk on December 3, 1987 and his son Levi Thomison was born on January 3, 1989. In July of 1996, he met Brandi Gilliland and the two were married on March 13, 1998. On October 13, 1998, his daughter Victoria Thomison was born. Gregory enjoyed going to rodeos and watching old western movies. He loved to spend time with his family, especially his children and grandchildren. Gregory also loved dancing with his wife and making people laugh. He will be dearly missed by all who knew him. He is preceded in death by his father George F. Thomison, his mother Linda Nell Brady, his brother Charles Graham Flannigan, and his sister Janie Lee Thomison Woody. He is survived by his wife, Brandi S. Thomison, his son Levi Thomison and his wife Kaylee, Stepdaughter Shyanne D. Gilliland, stepson Dustin Hollingsworth and his wife Sarah, stepdaughter Annie Wiechman and her husband Josh, daughter Victoria Griggs and her husband Hunter, his grandchildren Racie Thomison, Rook Thomison, and Monte Griggs and numerous nieces, nephews and cousins. A memorial service will be held on Saturday, September 12, 2020 at 10:00 am at the Humble Road Church in Bartlesville.

The family of Gregory Scott Thomison created this Life Tributes page to make it easy to share your memories.

Send flowers to the Thomison family.