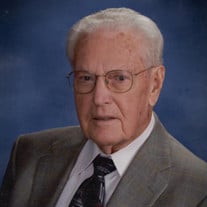 Grady T. Porter, aged 97, died September 14, 2021, in Broken Arrow, Oklahoma. A graveside service was held on September 17, 11:00 at Memorial Park Cemetery in Bartlesville, Oklahoma. Mr. Porter was born on June 28, 1924, in Vernon, Texas to Levi Morrison Porter and Anna (Walker) Porter. He graduated from Post High School in Post, TX, and joined the Army Air Force after high school, attending Radio Radar school. He was certified as a Marksman with a Carbine rifle and received a Good Conduct medal, an American Theater Campaign ribbon and a Victory ribbon while an Aviation Cadet. After his honorable discharge, he attended the University of Texas in Austin on the G. I. Bill. Mr. Porter started his employment with Phillips Petroleum Company/Applied Automation Inc., moving to Bartlesville with his new bride in 1953. He worked his entire career for the same company in the Research and Development field and obtained numerous patents for the company throughout his career, including a patent that was instrumental in the company’s success in the plastics development process. He was one of the company’s first computer programmers, using the original Assembly Language program and one of the original employees of Applied Automation Inc. when Phillips created the new subsidiary. He retired after 30 plus years with the company. Grady married Lora Ruth Norvell on March 17, 1953 and they recently celebrated 68 years of marriage. He was a longtime member of the Bartlesville First Church of the Nazarene and enjoyed fishing, gardening, pecan tree grafting, playing Bridge and Pegs & Jokers. He was preceded in death by his parents, Levi and Anna; his sisters, Ruth, Catherine, and Ann; and his brothers, Claude, Billy, Doris, Bernice, and Tommy. Grady is survived by his wife of 68 years, Lora Ruth Porter; daughters Joyce and Sandy; granddaughters Sarah and Amy; grandson-in-law Drew, great granddaughter April and great grandson Owen; one sister-in-law and many nieces and nephews. He was proud of his family’s career accomplishments, including Joyce’s long-time work in Child Welfare and creative writing abilities, Sandy's work in the Banking and Wealth Management sectors, Sarah’s success in the creation and publishing of comics and Amy’s position as a Pharmacy Manager. The family of Grady Porter has requested memorial contributions be made to Habitat for Humanity, honoring his life-long passion for working with his hands and building things out of wood. The family thanks Canoe Brook Assisted Living and Comfort Keepers for their compassionate care of Mr. Porter in recent months.

The family of Grady Truman Porter created this Life Tributes page to make it easy to share your memories.

Send flowers to the Porter family.