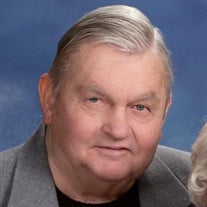 Gerald Lee Coast passed away July 7 at age 87. He was born October 4, 1932 in Avant, Oklahoma to Vivan Craft Coast and Bernice Millhouse Coast. He attended grammar school and high school in Ramona, Oklahoma. The family moved to Pauls Valley in his senior year. He graduated from Pauls Valley High School. He moved to Bartlesville and started his own Home Siding business, covering Oklahoma and Kansas. He served in the U.S. Army in El Paso, Texas. He married Anita Willson in 1953 while on military leave and the military moved them to Rapid City, SD. When discharged from the Army, they moved to Bartlesville, OK and Gerald began building homes. He had a 50 –year career in construction of custom homes throughout Bartlesville. He and his partners started the Woodland Park and Colonial Estates housing additions. Other housing additions included Pennington, Prairie Ridge and Grand Prairie. He also built commercial properties including the original Ramada Inn, Red Apple Bowling Alley, Dairy Queen, Volkswagen Car Agency, the downtown Truity Bank building and many more. He remodeled Highland Baptist Church and built an addition to that Church. He donated equipment and laborers to more an organ into the choir loft of Our Lady of Guadalupe Catholic Church in Dewey. He also built Heritage Villa Nursing Home. He donated thirty acres of property with other business partners to make construction of Green Country Retirement Village possible. Gerald was a loyal member of the Bartlesville Nazarene Church. He built the Nazarene Church on Adams Blvd. and went on Nazarene Work and Witness missions to the Dominican Republic and Zimbabwe. He was served on the Board of Bartlesville Nazarene Church. He also served as President of the Homebuilders Association and the Board of Plaza Bank. He was an active member of the Kiwanis Club and a strong supporter and active participant in the Gideon Society who provid bibles to hotels and other interested organizations. The family took many road trips and when they visited museums or historical sites, Gerald read every display placard that explained the value of what was exhibited. Each time, the family found this activity annoying. He is survived by his wife of 67 years, Anita, and his brother Harold Dean Coast and sister-in-law Ruth Coast of Bartlesville, his sister Gwen Coast Kirwin and brother-in-law Carroll of Bartlesville, his sons Steven and wife Kellie of Bartlesville, Larry and wife Marian of Olathe, Kansas, daughter Lisa and husband Pat McCurley of Oceanside, California, daughter-in-law, Donna Coast and 7 grandchildren and 17 great-grandchildren. Those preceding him in death were his father, mother, son Jimmy and grandson Duane. In lieu of flowers the family requests memorial donations in his name to the Salvation Army Auxiliary, 101 N. Bucy, Bartlesville ,Oklahoma 74003. Visitation for Mr. Coast will be at the Stumpff Funeral Home on Friday, Saturday and Sunday from 9 AM until 5 PM and on Monday from 9 AM until 8 PM. Funeral services will be held at 10 AM on Tuesday, July 14, 2020 at the First Church of the Nazarene with the pastor, Dr. Russell Hosey officiating. Interment will be in the Memorial Park Cemetery directed by the Stumpff Funeral Home & Crematory.

The family of Gerald Lee Coast created this Life Tributes page to make it easy to share your memories.

Gerald Lee Coast passed away July 7 at age 87. He was born October...

Send flowers to the Coast family.