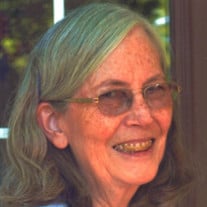 Georgia Lynn (Henry) Gates was born September 3, 1948 to the Rev. Charles & Carolyn (Turner) Henry, in Anniston, Alabama, the eldest of four children. She died on February 11, 2021 following a nearly five year battle with lung and brain cancer. Georgia was a “Resident” of “The Journey Home”, and under the care of “Comforting Hands Hospice”, both of Bartlesville, OK. Her passion was children was children as she was an elementary school teacher mentoring youngsters in San Antonio, Texas and Tulsa, Oklahoma. She retired from the classroom in 2000 Georgia’s other passion was serving the Episcopal Diocese of Oklahoma in virtually every aspect of youth ministry. Her most notable presence was seen and felt at the Episcopal Church’s camp and conference center Wewoka/Seminole Oklahoma. She began as a staff counselor and advanced camp dean and ultimately as director of summer camps. This ministry spanned some three decades and brought unconditional love to thousands of campers and adult staff alike. She has been lovingly remembered as “The Face of St. Crispins”. Georgia married late in her life to a long time friend, The Rev. Robert Gates. She and her husband lived in retirement in Bartlesville, Oklahoma where both were active members of St. Luke’s Episcopal Church. Georgia enjoyed the performing arts venues in Bartlesville including The Bartlesville Symphony, The Community Concert series, “The Broadway in Bartlesville Series”, OK Mozart and “The Children’s Musical Theatre”. In her spare time, she and her husband enjoyed weeklong sojourns to every quadrant of Oklahoma and learning their history and meeting their people. She especially enjoyed exploring around Kenton, Oklahoma, the only community in Oklahoma on “Mountain Time”. Georgia was preceded in death by her parents and two brothers, Chuck Henry and Gene Henry. She is survived by her husband Robert, of the home, her youngest brother, Jimmy of Early, Texas and numerous cousins, nieces and nephews around the country. A worship service to celebrate her life will be celebrated at a later date when gatherings are considered safer, and that time and place will be announced. Her remains are to be buried at Ft. Gibson National Cemetery, Ft. Gibson, Oklahoma. In lieu flowers, donations for a camp scholarship is being established in her memory that will allow anyone wanting to attend summer camp at St. Crispins the means to do so. Donations may be sent to: The Episcopal Diocese of Oklahoma, 924 North Robinson, Oklahoma City, Oklahoma, 73102. Please indicate “Georgia L. Gates Scholarship” on the memo line of your check.

The family of Georgia Lynn (Henry) Gates created this Life Tributes page to make it easy to share your memories.

Send flowers to the Gates family.