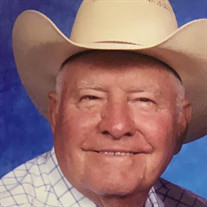 George Henry Prather, age 95, passed away on August 16, 2021, after a brief illness. He was born October 1, 1925, at his family’s home on Candy Creek (between Bartlesville, OK and Barnsdall, OK). He was the son of the late George Raleigh Prather and Jessie Marie (Kilgore) Prather. In 1944, he joined the Army and served his country in World War II. In 1951, he married the late Edna NaDean Prather in Bentonville, Arkansas, and they made their home in Bartlesville, Oklahoma. To this union, three children were born: John Prather, Cynthia Roberts, and Joy Galloway. Henry, as he was known to most, worked at TRW Reda Pump Company in Bartlesville, Oklahoma; first as a foundryman and later a supervisor. After 39 ½ years of service, he retired on December 15, 1984. Upon retirement, he and his wife built their home in Osage County and raised cattle and Quarter horses for racing and roping. Henry was a dedicated member of the Bartlesville Round-Up Club since its inception. He is one of the club’s only Lifetime Members. Henry is survived by his children John Prather, Cynthia Roberts, and Joy Galloway, all of Bartlesville; grandchildren Nikki (Mike) Young of Bartlesville, Kris Galloway-Perry of Bartlesville, David Roberts, M.D. (Laurissa) of Nashville, Tennessee, and Michelle (Drew) Peer of Chicago, Illinois; great-grandchildren Gracie Galloway-Perry, Collin Young, Cooper Young, Grayson Galloway-Tatum, Kennedy Roberts of Nashville, Tennesse, and Reece Young, Bartlesville; nieces, Tina Venn, Terri Summers, and Tammy Falleaf, Bartlesville. He will also be remembered by many great-nieces and nephews. Henry was preceded in death by his wife, Edna NaDean Prather, father and mother, George and Jessie Prather; one brother, Jack Walter Prather, and two sisters, Stella Mae (Gardner) Evans and Bertha Elizabeth Johnson. Funeral services will be held at East Cross Methodist Church in Bartlesville, Oklahoma on Monday, August 23, 2021, at 11:00 AM. Burial will follow at the Prather Family Home Cemetery that is located 3.6 miles west on County Road 3102.

George Henry Prather, age 95, passed away on August 16, 2021, after a brief illness. He was born October 1, 1925, at his family&#8217;s home on Candy Creek (between Bartlesville, OK and Barnsdall, OK). He was the son of the late George Raleigh... View Obituary & Service Information

The family of George Henry Prather created this Life Tributes page to make it easy to share your memories.

Send flowers to the Prather family.