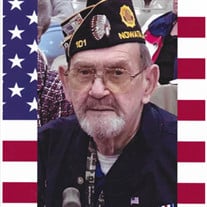 Longtime local resident and patriot George Carl Lee went to be with Jesus on August 20, 2020. With members of the family present, George peacefully left this life at his home at Coody’s Bluff. George was born on December 23,1931 in Morristown, NJ., being 1 of 11 children. Surviving the trying times of the 30’s and 40’s, George enlisted in the US Army at the age of 17 on May 18, 1949. Having just completed tank training at Fort Hood Texas when the Korean Conflict broke out, George was shipped to Puson, Korea to drive a tank for the 6th Medium Tank Battalion. After seeing much action, the unit was awarded the Presidential Unit Citation and George was awarded the Silver Star and Bronze Star medals. After his service, George ended up in Nowata doing sign painting and fixing bicycles so the local youth could have a bicycle club. David, Sherri and Diana were born during this time. In 1966 he worked as a ranch hand before operating the Coney Island Diner in 1967. He went back to New Jersey in 1972, married Carol Richards and brought the family to Nowata. He worked as a carpenter and painter, worked for the city of Nowata, built homes and worked for Bison Electric. George was always one to get involved in community. In 1982 he joined the Nowata County Sherriff’s Department as a Reserve Officer and became Nowata County’s first Civil Defense Director. He moved to the Rogers County Sherriff’s Department as patrolman in Talala then became Talala Chief of Police. He enjoyed meeting people and made many friends in the law enforcement agencies. After retirement George continued his service by joining the American Legion in a leadership role and set an example for the members to serve the community. During his 15 year continuous membership in the Legion, George performed Memorial Day and Veterans Day ceremonies at the cemetery and would participate in all partriotic parades and events. George loved the flag and the liberty and freedom it stands for. George was extremely proud of the new flag and flagpole that was installed at his residence a few weeks before his death, which permitted him to view it from the kitchen table or the porch. George is survived by 2 siblings, Ruth Crites and Tommy Lee of New Jersey, 7 children, David Lee of Elizabethtown, TN, Sherri Roll of Marseilles, IN(David), Dianna May Lee of Denison, TX, James Robert Richards, Susan Jean Monroe(James), David William Richards(Sondra), all of Nowata, and Nancy Lynn Turner of Coffeyville, KS, 20 grandchildren and 29 great grandchildren. He was preceded in death by his parents, wife Carol Ann and son Jeffery Richards. George requests that in lieu of flowers, donations be made to American Legion Post 101, 506 W. Shawnee, Nowata, OK 74048 Funeral arrangements handled by Nowata Stumpff Funeral Service with interment in Nowata Relocated Cemetery.

Longtime local resident and patriot George Carl Lee went to be with Jesus on August 20, 2020. With members of the family present, George peacefully left this life at his home at Coody&#8217;s Bluff. George was born on December 23,1931 in Morristown,... View Obituary & Service Information

The family of George Carl Lee created this Life Tributes page to make it easy to share your memories.

Send flowers to the Lee family.