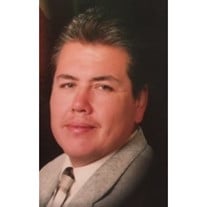 Gary Dean Stevenson 50 passed in peace to be with the Lord and his heavenly home on October 5, 2017 after a courageous 3 year battle with multiple illnesses. His devotion to his wife and family and his firm belief in God supported him in his struggle and ultimately gave him peace. While it is hard to describe someone like Gary Dean, he would be the one with the booming deep voice, the bright green eyes, the one on the loud Harley Davidson, the one with the most unique truck in the neighborhood, the one looking for meat pies at the pow wows, the one who played the country music so loud you could hear it before you saw the house, and the first one to give glory to God for the good things in his life and praise God in his struggles. Gary was born to Don and Lura Stevenson on Tuesday August 29, 1967 in Tulsa and as the saying goes was full of Grace and lived in the Skiatook area most of his life. Called to the ministry in the late 1990s Gary went to Rhema Bible School graduating from Pastoral Ministries in 2000. A teacher at heart Gary devoted time to youth ministries, teaching the Word of God, and counseling family and friends - always having time to help anyone who needed. Gary pastored in Skiatook at New Life Center and then Family Bible Church until his illness. Gary was blessed with a large and loving family. He married his best friend on June 30, 2007. With no children of the home he devoted his fatherly instincts to his nieces and nephews and to one special granddaughter, Harper Joan. He is survived by his wife, Patricia, his mother Lura, one brother Andrew and his wife Marilyn, two sisters - Debbie and husband Roger Ford, and Donna and husband Wade Gwinn. A step-son Aaron, and a step-daughter Belinda. Nieces and nephews: Kelvin Lee and Ruby, Andrea and Jeremiah, Angel and Ronnie, Joe and Bobby; April, Matt, Sherrie and David, Brandon and Kagyn, Piper, Grant, Mason, Harper, Cadence, Micayah, Josiah, Aubrianna, Peyton, Joshua, Kyler, Seneca, Eubank,  baby Sterling and many extended family and friends. He was preceded in death by his father Don, step-father Mel, and nephew Kenny. Services will be provided by: Peters-Stumpff Funeral & Cremation Skiatook, OK. Memorial donations may be made to: The Kidney Foundation

Gary Dean Stevenson 50 passed in peace to be with the Lord and his heavenly home on October 5, 2017 after a courageous 3 year battle with multiple illnesses. His devotion to his wife and family and his firm belief in God supported him in his... View Obituary & Service Information

The family of Gary Dean Stevenson created this Life Tributes page to make it easy to share your memories.

Gary Dean Stevenson 50 passed in peace to be with the Lord and...

Send flowers to the Stevenson family.