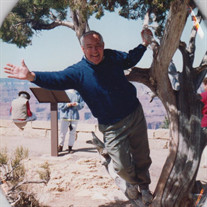 Frederick “Fred” Charles Pecher, 83 years young, a longtime resident of Bartlesville, OK, passed away at home on Thursday, August 5, 2021 after a long illness. Born March 26, 1938, in Jefferson City, MO, to Edward and Elsie Pecher, Fred grew up in Jeff City. There he attended St. Peter’s Parochial School. Later he studied at both St. Louis University and Lincoln University. He worked for several corporations, including Armco Steel, Coca-Cola Bottling Company, and Phillips Petroleum. He started to work with Phillips Pipeline in 1954 and went on to work for Phillips Petroleum (Director of Marketing) through his retirement in 1999. In the 1960s, he reacquainted with his childhood friend and love of his life, Judy Mosley, who he first met at church. In 1963, they married. Subsequently, they moved to Bartlesville, OK, in 1967 to raise their family. They had 4 children: Cathy, Mary, Joseph, and Sara. They were married 57 years at the time of her death in April 2021. Fred enjoyed volunteering and was dedicated to working at Mary Martha Outreach from 2001 to 2019, a nonprofit organization that helps the poor. His favorite part was helping people find clothes. In addition, he spent almost every year assisting with helping people register to vote and manning the voting booths in Washington County. He also was a tireless Team Father, Band Booster, and supportive dad for all his daughters’ many activities growing up, especially the Blazer Sports Organization. He was a veteran of the US Army and enlisted in St. Louis, MO, as a medic, receiving an honorable discharge in 1966. His hobbies included birdwatching, fishing, gardening, and traveling. He was an avid reader and loved anything that had to do with Space. He was quick to pitch in and help, often doing random acts of kindness and generosity for others without calling attention to it. His smile and laugh were contagious, and everyone who came into contact with him left feeling a little happier. He was a devoted father, husband, and friend. He is survived by his loving daughters, Cathy and Sara Pecher; his sister, Virginia Fister; and numerous nieces and nephews and great nieces and great nephews. He was preceded in death by his wife, Judy Pecher; his 2 infant children, Mary and Joseph; his brother and sister, Edward Pecher and Delores Cascia; and his parents, Edward and Elsie Pecher. A Rosary and Funeral Mass will be held for both Fred and Judy at St. John’s Before the Latin Gate in Bartlesville, OK, on Thursday, August 19, at 10:00 A.M. The family requests in lieu of flowers that a contribution be made to Mary Martha Outreach in Bartlesville, OK, or to the incredible Rivercross Hospice of Bartlesville, OK, to whom we owe a debt of gratitude for helping us care for Dad at home.

The family of Mr. Frederick Charles Pecher created this Life Tributes page to make it easy to share your memories.

Send flowers to the Pecher family.