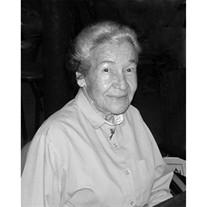 Funeral services for Faye Johnson, 94 of Claremore, Oklahoma will be held Tuesday, November 29, 2011 at 1:30 p.m. at the Memorial Heights Baptist Church in Claremore, OK with Pastor Paul Simpson and John Vanaman officiating. Interment in A.J. Powell Cemetery in Hominy, Oklahoma will be under the direction of Peters-Stumpff Funeral Home. Casket bearers for the service are Alan Loyd, Rodd Johnson, Ray Johnson, Richard Slavin, Richard Johnson and Paul Smith. Honorary casket bearers for the service are Fred Marion, Larry Green and Bert Bertolini. Music for the service will be provided by the Cherokee Singers, with pianist Ronda Frizly. Faye passed away on November 18, 2011 at her residence in Claremore, Oklahoma. She was born April 25, 1917 in Coalgate, Oklahoma to George W. and Susan Frances (Tweedle) Flud. She married Alva A. Johnson on April 13, 1955; he preceded her in death in February of 1982. She worked various jobs in the education field for the Catoosa Public Schools: she worked for the Johnson O'Malley program, as a tutor and a bus driver. Faye was involved with many organizations: the Rogers County Home and Community Education for 72 years, Oklahoma Retired Educators Association, Friends of the Will Rogers Library In Claremore, the Senior Citizens of Claremore, Indian Womans's Pocahontas Club, Rogers County Baptist Association, the Cherokee Nation, and was a tutor for Laubach/Proliteracy Worldwide. Faye was a member of the First Baptist Church in Catoosa, but attended Memorial Heights Baptist Church in Claremore. She is survived by two daughters: Stella Frances Quillin of Wynona; Mayme Slavin of Willow Park, TX; two sons: Richard Johnson of Kansas City, KS; Ray Johnson of Midland, TX; a sister Zetta Aubrey of Drumright, OK; a brother Henry Flud of Sterling, OK; nine grandchildren, 16 great grandchildren, one great great grandson and numerous nieces, nephews and cousins. She was preceded in death by her parents, her husband Alva a son Ellis Gray and seven siblings. In lieu of flowers donations can be made to the following organizations: Friends of the Will Rogers Library-Claremore, Claremore Senior Citizens, and the Baptist Children's Home. www.Peters-Stumpff.com

The family of Faye Johnson created this Life Tributes page to make it easy to share your memories.