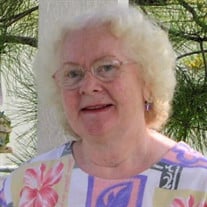 Evelyn Alice Hale Kannel died at home on Sunday January 3, 2021 at 85 years old. She had fought the good fight and it was time to be called home and reunited with her husband Casper Kannel Jr whom she had missed since his passing in 1999.. Evelyn was born in Bay City, Oregon on May 5, 1935, the daughter of Murray Nelson Hale and Mary Ruth Kodad Hale. She later moved with her family to San Francisco where she met and married her husband Casper Kannel Jr on October 16, 1957. They each had a child from previous marriages and three more children were born to them from their union. While a blended family, we were never aware of any differences between us. In 1969 our family moved from California to Bartlesville, Oklahoma where we lived for three years before moving to London, England for a 5 year stint courtesy of Phillips Petroleum Company. In 1977 it was needed to move back to Bartlesville where Evelyn lived for the next 43 years as wife, mother, and homemaker. The years went by and her nest emptied little by little until it was just her and our dad left to enjoy their remaining years together traveling the country on bus tours and enjoying time with their children and grandchildren. After 42 years of marriage, Dad preceded her in death on September 24, 1999. Now on her own, Evelyn spent her time crafting and had a special ministry of taking care of elderly neighbors around her whom she had befriended years before. She never felt alone as she kept busy with family and friends traveling to craft classes, visiting family outside of Oklahoma, and pursuing other fun adventures. About 10 years ago she found a spiritual family in the congregation of Rose Hill Baptist Church where she enjoyed worship, Bible studies, and fellowship with her friends there. Evelyn was preceded in death by her husband Casper, son Michael, parents Nelson and Ruth, brothers Earl and Ed, and sister Eleanor. She leaves behind a brother, Eugene, and his wife Fran, and her sister Ellen. Her daughter-in-law Trace, daughter Verna, son David and his wife Icy, Alice and her husband Mike, son Daniel,. Grandchildren Rachel, Kevin, John, Samantha, Nicholas and his wife Melody, Jody and her husband Afshar, Stuart and his wife Kathryn, Matthew and his fiancee Kayla, Jeffrey, Christopher and his wife Jenny, Stephen, Joseph, Margaret, Katherine and Rebecca Great grandchildren Mireya, Savanna, Lola, Shanay, Christopher, Alissa, and Angelica. Great-great-grandchildren Hannah, Aynsley, Jackson and Grayson. And many nieces, nephews, family and friends. Our family would like to extend our deepest gratitude to Comforting Hands Hospice for helping Mom to transition from death to everlasting life and for comforting us in our sorrow. Every person we met was caring and kind and made the last week of Mom’s life a little bit easier. In lieu of flowers please send donations to Comforting Hands Hospice, the American Heart Association or another charity of your choice in her name as a remembrance.

Evelyn Alice Hale Kannel died at home on Sunday January 3, 2021 at 85 years old. She had fought the good fight and it was time to be called home and reunited with her husband Casper Kannel Jr whom she had missed since his passing in 1999.. Evelyn... View Obituary & Service Information

The family of Evelyn Alice Kannel created this Life Tributes page to make it easy to share your memories.

Send flowers to the Kannel family.