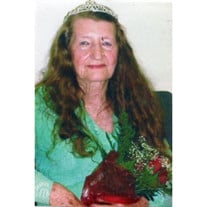 Funeral services for Evelyn Kathryn Antle, 96, of Skiatook, Oklahoma will be held Thursday, January 31, 2013 at 10:00 a.m. at Peters-Stumpff Funeral Home Chapel in Skiatook, Oklahoma with Reverends Lynda Ward and Dale Nielsen officiating. Interment in Osage Garden Cemetery in Skiatook is under the direction of Peters-Stumpff Funeral Home. Casket bearers for the service are Chris Antle, Jeff Antle, Griffin Antle, Ethan Antle, Tyson Antle, Eric Dawson, Jessie Elam, James McIntire, Jason King and Eugene Dawson. Evelyn passed away on January 27, 2013 in Collinsville, Oklahoma. She was born November 14, 1916 in Terlton, Oklahoma to Joseph Roy and Selma (Dagner) Hicks. Evelyn married Joseph Charles Antle Sr. on November 26, 1936 in Terlton, OK; he preceded her in death on April 21, 2003. They moved to Skiatook in 1961 where Evelyn was a member of the Reorganized Church of Jesus Christ of Latter Day Saints and a honorary member of the 1st Presbyterian Church. She also was a member of the Red Hat Society and was on the Help Build the Pool Committee. Evelyn helped the Guts Church by being a greeter for their Mission, and helped with Operation Christmas Child. She spent many hours at the antique store greeting and helping those who came in. Evelyn enjoyed writing, many didn't know that she was a published author. Evelyn moved in to West Oak Village where she won the title Queen of West Oak Village. She is survived by her five children: Joseph (Jody) Charles Antle and wife Carmen of Hominy; Jeannie Reyckert and husband Chester of Skiatook; William John Antle and wife Jewell of Hominy; Jackie Ray Antle and Rex Robbie Antle and wife Rebecca all of Skiatook; over fifty grandchildren, great grandchildren and great great grandchildren, and numerous nieces and nephews. She was preceded in death by her parents, husband Joseph, a daughter Kathy, a granddaughter Julia and four brothers. www.Peters-Stumpff.com

The family of Evelyn Kathryn Antle created this Life Tributes page to make it easy to share your memories.

Send flowers to the Antle family.