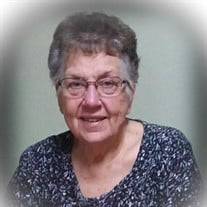 On Tuesday, July 7, 2020, Eva Jean (Jeannie) Jones, loving wife, and mother of four children, died at the age of 81. Jeannie was born January 16, 1939, in Nowata, Oklahoma to John Brannan and Eva Wall Brannan in a tin house where she also grew up the youngest of six siblings. She graduated Nowata High School in 1957 and started working for Southwestern Bell. Her faith in God and her family were the two most important things in her life, and she was rich in both. On March 28, 1959, she married John Riley Jones, Jr. and soon they decided to start their own family, having two sons, Leslie and Alan, and two daughters, Cindy and Lori. Their children brought them great happiness and later grew their family, blessing them with five grandchildren and six great grandchildren. Jeannie enjoyed working in her yard and tending her garden. She loved family camping trips, fishing, and family game nights, all with plenty of laughter, which was always in abundance when Jeannie was around because of her amazing sense of humor. Jeannie attended church regularly and was a member of the Tuxedo Assembly of God Church. She was involved with the women’s ministry and enjoyed sharing her love of God through preparing meals for people, visiting shut-ins and the sick, and praying for people. She and her husband, John, were active as youth Sunday school teachers for many years and loved the kids they taught as their own. Working with kids brought Jeannie joy. She worked at Ranch Heights elementary School for 26 years, initially as a child nutritionist, and eventually being promoted to cafeteria manager, which was her title when she retired June 1, 2000. At the employee banquet, they recognized her “kindness, smile, and laughter” and “cheerful spirit and beautiful attitude.” She was preceded in death by her parents John Brannan ad Eva Wall Brannan; son Leslie Dewayne Jones; sisters Alta Pearl Parrett, Lulu May Barnett, and Ada Mary Garms; brothers Steven Wall Brannan and Clarence Franklin Brannan. She is survived by husband John Riley Jones, Jr.; children Cindy Sturges, Alan Jones, and Lori and John Smith; grandchildren Wes and Rachelle Sturges, Wade Sturges and Hannah Lawrence, Steven Haughn, Will Sturges and Mabaelu Carreno, and Jennifer and Clay Tate; great grandchildren Eli Sturges, Johnny White, Exodus Sturges, Azula Sturges, Amelia Sturges, and Emzee Sturges. Visitation will be Sunday, July 12 from 9am to 8pm. The family will receive guests from 4pm to 6pm. Funeral services will be Monday, July 13 at 2pm at Bartlesville Tuxedo Assembly of God with interment to follow at the Nowata Memorial Park Cemetery. In lieu of flowers, it is requested that donations be made to Tuxedo Assembly of God Church.

On Tuesday, July 7, 2020, Eva Jean (Jeannie) Jones, loving wife, and mother of four children, died at the age of 81. Jeannie was born January 16, 1939, in Nowata, Oklahoma to John Brannan and Eva Wall Brannan in a tin house where she also grew... View Obituary & Service Information

The family of Eva "Jeannie" Jean Jones created this Life Tributes page to make it easy to share your memories.