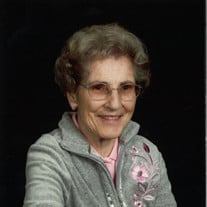 The Life of Emily Wilson Kuntz EMILY WILSON KUNTZ Left this world to be with Jesus on Sunday, December 13, 2020 at the age of 93. She was born on May 31, 1927 in Stillwater, Ok. To Dr. Herbert Patterson and Mary Schenk Patterson. Mary died of pneumonia in Dec. 1928, leaving three little girls – Nancy was five years old, Emily was not quite two and Esther was four months old. The three sisters were great friends throughout their lives. Emily also had a half sister, Ruth and a half brother, John, by Herbert’s first marriage. Emily’s dad hired good help to look after his children for a couple of years after his wife died, then married Florence Schertz who was the assistant head of the Home Economics Department at Oklahoma State University. Herbert was Dean of Education at the university and later the Dean of Administration. Florence had a big job taking care of three girls, but did it well. She was a fine person and all the family loved her. Herbert wanted to hurry the girls along so they completed high school in three years plus some summer school and did the same thing in college. Emily had just turned twenty when she graduated from college. She majored in Home Economics and music. She was awarded a Danforth Fellowship the summer she graduated which included two weeks in St. Louis and two weeks in Michigan. There was only one girl from each state and they went by the name of their state. Emily taught Home Economics and music for two years in Anthony, Kansas. In June 1949 she married Lawrence (Larry) Wilson who was a chemical engineer working for Humble Oil Co. In Baytown, Texas, where they lived for two years before moving to Bartlesville, Oklahoma where Larry worked for Phillips Petroleum Co. Emily and Larry had three children, Kenneth, Nancy and Paul. Emily was struck with polio in 1952, spending some time in the hospital in Tulsa and eventually achieved full recovery. She was very involved with the education of her children and their lives in Bartlesville. As her children grew, she encouraged all three of them in scouting and was Den Mother in Cub Scouts and a Troop Leader in Girl Scouts over the years. She also taught piano and was a volunteer at Mutual Girls Club helping young girls with reading, sewing and music. She also volunteered at two grade schools to help young children improve their reading skills. She loved children and helped them whenever and wherever she could throughout her life. The Wilson’s had a cabin (second home) at Sunset Lake, which they shared with family and friends for thirty years. A very important part of Emily’s life was her church where she sang in the choir, taught Sunday School and worshipped regularly. Emily’s husband Larry died in February 1999. In 2006 she married Louis Kuntz, a long-time friend and fellow Christian in her church – East Cross United Methodist. They had a loving and happy marriage and continued to participate in their church as best they could with his loss of hearing. Louis died in February 2019. Emily spent the last few years of her life at Heritage Villa Nursing and Rehabilitation Center in Bartlesville. She was well liked at Heritage Villa and received excellent care. She was visited daily by Louis while he still lived. Emily will be greatly missed by her Family and Friends. She is preceded in death by both of her husbands. She is survived by her son Kenneth and his wife Priscilla (Boulder, CO), her daughter Nancy (Sioux Falls, SD), and her son Paul and his wife Katheryn (Champaign, IL). Emily is also survived by her granddaughter Willow and Willow’s husband Omar and their two daughters (Emily’s great granddaughters) Maryam and Safeya (Seattle, WA) and by her granddaughter Meredith and her husband Alex (Boulder, CO). In Lieu of flowers, donations can be made to the East Cross United Methodist Church “Missions”, 830 Madison Blvd., Bartlesville OK 74006.

The Life of Emily Wilson Kuntz EMILY WILSON KUNTZ Left this world to be with Jesus on Sunday, December 13, 2020 at the age of 93. She was born on May 31, 1927 in Stillwater, Ok. To Dr. Herbert Patterson and Mary Schenk Patterson. Mary died... View Obituary & Service Information

The family of Emily Wilson Kuntz created this Life Tributes page to make it easy to share your memories.

Send flowers to the Kuntz family.