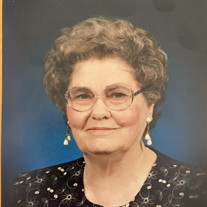 In Memory - Ellen Louise Korner Mrs. Ellen Louise Korner, 91, of Bartlesville, died May, 9 2022. A funeral Mass will be held at 11 A. M. on May 23 at St. James Catholic Church directed by Stumpff Funeral Home & Crematory. Mrs. Korner was born April 1, 1931, in Pittsburg Kansas, the daughter of Cledies and Ellen Dray. She grew up in Pittsburg, Kansas, and graduated high school in 1949. She and Joseph Francis Korner were married at the Sacred Heart Catholic Church in Frontenac, Kansas, on November 19, 1949. They made their home in Pittsburg before moving to Bartlesville in 1951, where Joe was employed with Phillips Petroleum company. She was a member of St. James Catholic Church and was a homemaker raising five sons. Louise grew to love sports as her sons participated in many sports up to, and including college. When the sons were older, Louise was employed at Peters department store and eventually managed the Peter's store in Dewey. Her greatest achievement was her family. She loved family gatherings. She was pre-deceased by her husband Joe, her oldest son, Barry Joe, her parents, and sisters, Ruby Chubb and Lois Swope. She is survived by a sister, Nancy Bills of Cedar Rapids, Iowa, and sons Daniel and wife Doris of Oklahoma City; David and wife Lisa of Pittsburgh, Pennsylvania; Bryan and wife Lisa of Jenks, OK; Robert of Broken Arrow, OK; 9 grandchildren and 11 great children. Contributions in memory of Ellen Louise Korner may be made to Catholic charities.

Send flowers to the Korner family.