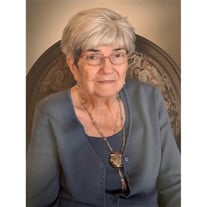 Elizabeth Ann Guilfoyle Sauer, 92, of Collinsville, Oklahoma passed away on December 12, 2020. Mrs. Sauer was born February 4, 1928 in Sperry, Oklahoma. Elizabeth, one of nine children, was born to Hank and Emily Guilfoyle. Elizabeth attended St. John's nursing school in Tulsa, OK after high school. She met her husband Carl Willard Sauer at a Catholic bowling event. Carl soon asked her hand in marriage and they were engaged for three years while she completed nursing school. They were married September 4, 1950; just days after graduating nursing school, as it was important to Carl for her to obtain her education. Carl and Elizabeth immediately started a family and had seven children together. Elizabeth is remembered for having a soft voice, giving loving hugs and saying "Okie Dokie", "A bushel, a peck and a hug around the neck" and "A hug will make you live longer, you can never have too many." Those fortunate enough to be a part of Elizabeth Sauer's life are lucky, she made everyone feel as though she deeply loved and cared for them. She is preceded in death by her husband Carl and her daughters Karen and Karol. Elizabeth is survived by her loving children Mary Smith, Karla Fitzloff, Joe Sauer, Diane Williams, Steve Sauer, their spouses, grandchildren, great grandchildren and a brother and a sister, Donald Guilfoyle and Mary Spencer.Due to the current pandemic, a small private service limited to her immediate family members will be held in Skiatook, OK.

The family of Elizabeth Ann Sauer created this Life Tributes page to make it easy to share your memories.

Send flowers to the Sauer family.