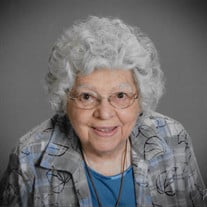 Grace Elizabeth (Betty) Staples Herdman was born April 21, 1925, in Plainfield, New Jersey, the second child of Grace Emma Beal Staples and John Auten Staples. As a family, they enjoyed walking the hills of New Jersey and hiking the mountains of New Hampshire. She died October 13, 2020, in Tulsa, OK, while a resident at Covenant Living at Inverness Village. When Betty was fifteen, the family moved to the St. Louis, MO, area where she completed high school in University City. Betty graduated with a B.A. in Sociology from DePauw University, Greencastle, IN, where she was an active participant and affiliated with Alpha Gamma Delta Sorority. During summers she worked at a camp in northern Wisconsin. Betty received her M.S. in Physical Education from Smith College in Northampton, MA, then became an Instructor at the University of Colorado in Boulder. Betty met Eric B. Herdman, Jr. who worked with the Bureau of Reclamation in Estes Park, CO. They married on June 30, 1951. Ric joined Phillips Petroleum Company and they moved to Borger, TX, where their two daughters were born. Additional moves took them to Amarillo and Arlington, TX; Bartlesville, OK; Aberdeen, SD; St. Louis, MO; Wheaton, IL; Greenville, MS; Raleigh, NC, and Pasadena, TX, before returning to Bartlesville in 1973. Betty volunteered in schools, communities and Presbyterian churches wherever they lived. She also conducted workshops and teacher training events. Betty’s second career outside the home was in Christian Education. In Pasadena and Bartlesville, she founded and directed two preschools. Her husband died in 2001 and Betty relocated to Inverness Village, Tulsa, OK, in 2006, where she was involved in many activities. She was a Deacon and Elder in the Presbyterian Church (USA) and a member of the Sapulpa congregation. Betty is survived by her children Jan, Linda, and David and their spouses Rich, Jim, and Nancy, five grandchildren and six great-grandchildren, her brother John of St. Louis, nieces, and a nephew. In the near future, a memorial service will be held at First Presbyterian Church Sapulpa. In lieu of flowers, the family suggests contributing to an organization of your choice in Betty’s name.

The family of Elizabeth Herdman created this Life Tributes page to make it easy to share your memories.

Send flowers to the Herdman family.