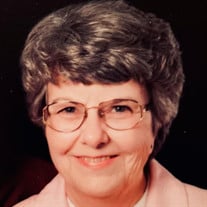 Edith Joan Wright, known by most as “Joan,” passed from this world at the age of 81 on Saturday, January 28, 2022 at 10:24pm. She is survived by: her husband, Bill Wright; her niece, Linda Hope and her husband, Leanard; her step-daughter Lisa Penick; her step-son Roy Wright and his wife, Shelly Wright; her grandson Dustin Tessier and his wife, Crystal Tessier; her granddaughter Amy Houser and her husband, Heath Houser; her granddaughter Macy Schmidt and her husband, Jody Schmidt; her grandson Cody Penick and his wife, Hayley Penick; and her grandson Tyler Penick and his fiancée, Cara Pestel. She was blessed with an abundance of great-grandchildren: Addison Tessier, Lane and Emry Houser, Luke and Evie Schmidt, and Karis Penick. She is preceded in death by her parents, her brother David Wright, her sister-in-law Janice Wright, her niece Diane Hein, her step-son Mike Wright, and many other precious friends, family, and loved ones. Joan was born in Coffeyville, Kansas on January 19, 1941. She graduated from Coffeyville Field Kindley High School in 1959. Joan earned an associate’s degree from Coffeyville Community College and later went on to work for Phillips Petroleum as a legal assistant. She married the love of her life, Bill Wright in Bartlesville on December 2, 1971 and they enjoyed a wonderful 51 years of marriage together. Joan was a lovely wife, grandmother, and great-grandmother, and a devout Christian. She will always be remembered as a gentle, loving, and selfless woman who loved her family with all her heart. Our Nana will truly be missed.

The family of Edith Joan Wright created this Life Tributes page to make it easy to share your memories.

Edith Joan Wright, known by most as “Joan,” passed from this...

Send flowers to the Wright family.