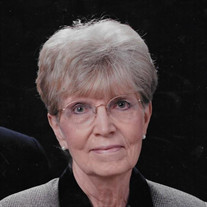 Dorothy Jane Knerl Schwermer, 91, of Bartlesville, died on Saturday, October 10, 2020 Dorothy Jane Knerl Schwermer was born on October 13, 1928 in Sedalia, Missouri to Elsie and Floyd Knerl. She attended Broadway Grade School and graduated from Smith-Bottom High School in 1946. She worked for Metropolitan Life Insurance Company until her marriage to Ted Schwermer on October 3, 1948. They were blessed with two sons Gary Michael and Terry Guy. Ted and Dorothy knew each other from the time they were very young as their parents attended the same church. They were involved in all church activities and attended both grade school and high school together. They started dating in high school and were married for sixty-five years until Ted’s death. Dorothy is survived by two sons, Terry, and Gary and his wife Cindy, all of Bartlesville. Granddaughters Kristy Feeler and Ealisa and husband Tyler Adams, grandson-in-law Kevin Murphy, also great-grandchildren Addison Peck, Emerson and Gracyn Murphy, Kaden, Emery and Gavin Feeler, David, Theodore, Lincoln, Makiah, Lilli, Mystical, Victoria, Danyell and Jessica. She is also survived by her sister-in-law Willa Schwermer, her brother-in-law Clyde Schwermer and his wife Linda, niece Tammy Davis and her husband Bill, nephew Kim Lingle and wife Jeanine. She was preceded in death by her husband, Ted Schwermer, granddaughter Kelly Murphy, sister Donna Lingle and her parents Elsie and Floyd Knerl. Private family services will be held. Cremation arrangements are under the direction of Stumpff Funeral Home and Crematory. In Lieu of flowers, donations may be made to the Boys and Girls Club of Bartlesville.

The family of Dorothy Jane Schwermer created this Life Tributes page to make it easy to share your memories.

Send flowers to the Schwermer family.