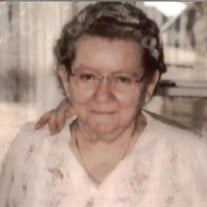 Dorothy Marie O’Neal Ashlock-Lynn passed away on January 9, 2022, at her home in Copan, Oklahoma, at the age of 93. She was born to Pierson O’Neal and Verna Jewell (Gann) O’Neal in Catoosa, Oklahoma on January 30, 1928. She earned her education at Northeastern Oklahoma. She was a homemaker while her children were young. She later worked at Sadoris Cleaners as a seamstress until she was hired at Phillips Petroleum Company to work in the maintenance department. On October 21, 1942, she married Calvin Daniel Ashlock. Following his death in 1968, she married Billy Eugene Lynn on March 2, 1973. Dorothy enjoyed sewing and cooking, as well as gardening where she would tend to her many flower beds of roses, irises, and various other blooming plants. Dorothy is preceded in death by her parents, Pierson and Verna O’Neal; her brothers Hubert, Clifford, and Charles; her sister Margret; both husbands, Calvin Ashlock and Billy Lynn; her stepchildren: Martha Lynn, Harold Lynn, and Eddie Lynn; her daughter Deloris (Ashlock) Carboni; and her daughter-in-law Paulette Ashlock. She is survived by her sons Calvin Junior Ashlock and Jerry Lee Ashlock both of Copan, OK; her sister Nancy Bostater of Tahlequah, OK; her grandchildren: Kim Jellison (Larry) of Dewey, Amy Ashlock (Jeff Etter) of Bartlesville, John Carboni, Chris Carboni, Greg Carboni (Deana Mason), and Lesli Carboni (Jeremy Brown), all of Bartlesville, Daniel Ashlock (Jorrae) of Copan and Jaime Werts of Bartlesville; her great-grandchildren: Hunter Etter (Whisper) and their children, Kolby Baxter (Tiffany Loosen), Neveah Ashlock and Arlo Ashlock; stepdaughter Judy Green and family; as well as numerous nieces and nephews, and many family friends. A graveside service will be held Wednesday, January 12, at 2 p.m. at Memorial Park Cemetery in Bartlesville and is under the direction of Stumpff Funeral Home and Crematory.

The family of Dorothy Marie Ashlock-Lynn created this Life Tributes page to make it easy to share your memories.

Send flowers to the Ashlock-Lynn family.