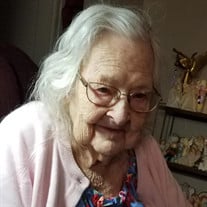 Doris Lucille White passed from this world on Wednesday, January 26, 2022, at the age of 100. She was the beloved matriarch of a large extended family. She was loving, patient, and kind to the entire family and she especially loved the little children. Doris was born in Dewey, Oklahoma to John Dillard and Arwilda Youngblood. Her father was a carpenter, and her mother was a housewife and the local Dewey midwife who drove a horse and buggy to deliver babies in the local area. Doris attended Dewey School until the 8th grade. She was the last surviving child of seven children. The stars collided when Doris met her husband, Emmett White, when he had a flat tire and asked to borrow a jack from her father. In 1938, she was wed to Emmett in Pawhuska, Oklahoma. They enjoyed 45 years of blissful marriage until his passing in 1983. They bought a farm in Dewey, and while Emmett worked as a machinist, Doris ran the family dairy. She would hand milk 14 cows twice a day, separate the cream and deliver it to the train depot in Dewey to ship and sell. Doris was industrious and hardworking not only with the dairy cows, but also growing a large garden, raising chickens, and canning the fruits of her labor, a skill and passion she passed to the younger generations. In her relaxing moments, Doris would crochet, embroider, and sew. She sewed all of her daughters’ clothes and many nieces and nephews’ clothes as well. Later in life, she found her passion in quilting and made over 100 quilts during her life that are now treasured by her family as the works of art that they are. Doris and Emmett had one beloved daughter Marian Faye Flores who preceded her in death, but blessed Doris with seven loving grandchildren: Cristle Hayes, Kendle Ortiz, Everett Reedy, Kenneth Reedy, Jason Bowman, Joshua Bowman, and Jerremey Bowman. Doris has 20 great-grandchildren, 26 great-great-grandchildren, and 1 great-great-great-grandchildren. She also has generations of nieces and nephews. Doris services are being arranged by Stumpff Funeral Home and Crematory. There will be a general viewing on Wednesday, February 2, from 9:00 a.m. until 5:00 p.m. and formal family viewing from 5 p.m. until 7 p.m. Graveside service will be held Friday, February 4, at 2 p.m. at the Dewey Cemetery.

Doris Lucille White passed from this world on Wednesday, January 26, 2022, at the age of 100. She was the beloved matriarch of a large extended family. She was loving, patient, and kind to the entire family and she especially loved the little... View Obituary & Service Information

The family of Doris Lucille White created this Life Tributes page to make it easy to share your memories.

Doris Lucille White passed from this world on Wednesday, January...

Send flowers to the White family.