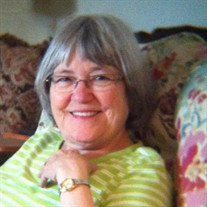 Donna Jean "Jeanie" Sharp, 75, of Bartlesville, passed away at home in her sleep on May 29, 2022. A memorial gathering will be announced at a later date. Donna was born November 25, 1946, in Ramona, Oklahoma, the youngest child of Leroy and Irene (Gardner) Bacon. After living and attending school in Ramona and Vera, her family settled permanently in Bartlesville in 1956 and she received her education at Limestone Elementary, Madison Junior High, and College High School graduating in 1964. Donna was a computer programmer for the First National Bank in Bartlesville and Peter’s in Dewey, but the bulk of Donna’s career was with the Social Security Administration. She began as a claims representative in the Bartlesville office and eventually became the office manager. In 1995 she transferred to the regional Social Security Teleservice Center in Albuquerque, New Mexico as a trainer and later became a claims supervisor. On July 30, 1996, Donna married Mike Sharp in a ceremony at Johnstone Park in Bartlesville under a blue moon. They have celebrated eleven blue moon anniversaries. The couple resided in New Mexico until 2005 when they both retired and moved back to their hometown of Bartlesville. Her favorite vacation spot was Las Vegas and the casinos welcomed her with open one-armed bandits. Following that she enjoyed being on a cruise ship leading anywhere. She enjoyed all types of music, feeding and watching the birds, dogs, and cats of all shapes and sizes, and of course their trips to Las Vegas to play the slots and participate in poker tournaments. When at home she worked three crossword puzzles each day, played online poker, and was the family’s “Jeanie”-ologist. Donna is preceded in death by her parents and her brother Don Bacon. She is survived by her husband Mike Sharp, one brother Ted Bacon of Afton, OK., sons; Doyle Brookshire and wife Gail of Ponca City, Matt and Tammy Sharp, of Normal IL, and Mark and Lee-Ann Sharp of Chicago, IL., Also surviving are six grandchildren; Kylie and husband Ben Foristall, Cody Brookshire, Jake Brookshire, Courtney Sims, Charlie Sharp, and Aria Sharp and three great-grandchildren; Madison Johnson, Noah Foristall, Ava Brookshire, nieces; Jolynn Bacon of Bartlesville, and Lisa McGraw of Las Vegas, nephews; Bill Bacon of Las Vegas, Leon and Kelly Bacon of Ochelata, OK. As a life-long dog lover, Donna would be honored if memorials would be offered to the Washington County SPCA in her name. The address is 16620 State Hwy 123, Bartlesville, Ok. 74006

Donna Jean "Jeanie" Sharp, 75, of Bartlesville, passed away at home in her sleep on May 29, 2022. A memorial gathering will be announced at a later date. Donna was born November 25, 1946, in Ramona, Oklahoma, the youngest child of Leroy and... View Obituary & Service Information

The family of Donna Jean "Jeanie" Sharp created this Life Tributes page to make it easy to share your memories.

Donna Jean &quot;Jeanie&quot; Sharp, 75, of Bartlesville, passed away at...

Send flowers to the Sharp family.