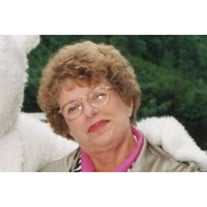 Funeral services for Donna Sue (Watson) Jones, 75, of Skiatook, Oklahoma will be held at 10:30 a.m. on Monday, October 15, 2012 at the United Methodist Church in Skiatook, Oklahoma with Pastor Bill Taylor officiating. Interment in Osage Garden Cemetery is under the direction of Peters-Stumpff Funeral Home. Casket bearers for the service are Jeff Jones, Ronnie Cohea, Terry Harper, David Patrick, Bob Enlow, Harry Redeagle and Jim Patrick. Honorary casket bearers were the Class of 1955. Musical selection for the service are "I'll Fly Away" sung by the King Family, "Standing On The Promises" sung by Jennifer Hallum and congregational Hymn "Dwelling In Beulah Land. Debbie Seals is the pianist for the service. Donna passed away on October 11, 2012, in Skiatook. She was born on December 16, 1936 in Skiatook, Oklahoma to Cecil and Zeona (Bradshaw) Watson. Donna was a graduate of the Skiatook Class of 1955. She continued her education at Oklahoma State University receiving her bachelor degree with the class of 1959. She married Jack Jones, on December 27, 1959 in Skiatook. Donna worked many years for the Skiatook Public School system. She was a first grade teacher at Marrs elementary where she touched many young life's over the years. Her students were so important to her that she would send notes to all the ones that would graduate. Donna was proud to be a member of the class of '55 and enjoyed spending time with her classmates. Donna was a fun-loving, silly person, who never meet a stranger and always had a story to tell. She was proud to be an Osage Indian, and was an avid OSU Fan. Over the years Donna stood behind many causes being very dedicated to each one. She stayed busy by being involved with the following organizations: Skiatook Museum, Nature Conservancy, United Methodist Woman, ESA, and the National Education Association. Donna was a lifelong resident of Skiatook where she was a member of the United Methodist Church. During her life Donna met a lot of people who became her friends and they will miss her dearly. Donna is survived by her husband Jack of the home; two daughters: Jackie Jones of Skiatook; Jennifer Hallum and husband Mark of Muldrow, OK; three grandchildren: Gideon Hallum, Rachel Hallum and Luke Hallum. She was preceded in death by her parents. www.peters-stumpff.com

The family of Donna Sue Jones created this Life Tributes page to make it easy to share your memories.