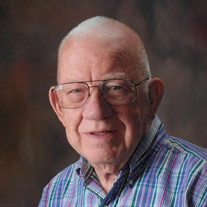 Donald Elmer Seizinger On Sunday, August 9, 2020 Don Seizinger entered the gates of Heaven. Don’s final days were spent at The Journey Home in Dewey, OK and in Memory Care at Green Country Village in Bartlesville, OK. Don was born on March 20, 1933 in Cairo, IL. He earned a BA in Chemistry at Southern Illinois University, Carbondale in 1955. He followed his education with service in the United States Air Force. He was stationed at Edwards Air Force Base and served as a resource person for the first International Ballistic Mission. Following his service, he married his soul mate and the love of his life, Shirley Ann Appel. They were married at the Methodist Church in Enfield, Ill. This began a cherished union that lasted over 60 years. Together Don and Shirley began a family and in 1963 moved to Bartlesville, OK. Don worked as a research chemist at Mallincrokdt Chemical Works in St. Louis, the Bureau of Mines, and the US Department of Energy in Bartlesville. His special area of expertise was fuels combustion. When early retirement allowed him to make a career shift, he taught Chemistry at Tulsa Junior College. Don was an excellent photographer and took thousands of spectacular photos in his greenhouse and on the many trips he took with Shirley. Usually camping in a tent or converted van they saw the US and Canada more than once! When God made Don, He gifted him with an enormous servant’s heart. Countless Boy Scouts, youth groups, Sunday School classes, DeMolay boys, Habitat for Humanity residents, Camp McClintock campers, Mary Martha clients and Ranch Heights readers were touched by Don’s calling to help his neighbor. Don and Shirley together tutored reading students at Ranch Heights Elementary School for 11 ½ years, the school that their own children attended years before. He was always first in line to change a tire, trim someone’s bushes or help any way he could. Among his many accomplishments one of his family’s most treasured was that of him being Pop Pop! He was a hands-on grandpa and made a special impact in each of his grandchildren’s lives. Everything from being his granddaughter’s care giver when she was only a few weeks old, teaching grandkids to stand on their head and wink, sharing inspiring stories of his life experiences and being a important presence in each of their unique lives. He will be greatly missed! Don is survived by his beloved wife of 60 years, Shirley. His daughter, Elaine (John) Harris of Edmond, OK, his son, Karl Seizinger of Tulsa, OK, his grandchildren, Kendall Harris, Jacob Seizinger, Andrew Harris, and Zachary Seizinger. Also, his brother, Howard (Charlene) of Austin, TX, sisters-in-law June York of Chester, IL and Mary Lou Perkins of Garland, TX and eight nieces and nephews. He was preceded in death by his parents, Elmer and Gertrude Seizinger, his in-laws, Paul and Vern Appel, his sister, Jean Klein, two brothers-in-law, William R Klein and Tom Perkins and a nephew, Paul Perkins. Don’s Celebration of Life will be held at 11 A.M. on Saturday, August 15, 2020 at First Wesleyan Church, 1776 Silverlake Road, Bartlesville, OK 74006 with Pastor Joe Colaw officiating. Internment will be in Memorial Park Cemetery, Bartlesville, OK. Friends who wish to sign the guest book and leave their condolences can do so at www.stumpff.org. In lieu of flowers memorial donations can be made to The Journey Home, 900 N.E. Washington Blvd., Bartlesville, Oklahoma, 74006 or First Wesleyan Church, 1776 S.E. Silver Lake Road, Bartlesville, Oklahoma, 74006.

The family of Donald E. Seizinger created this Life Tributes page to make it easy to share your memories.

Send flowers to the Seizinger family.