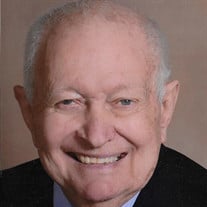 Donald M. Pyles, 85, passed peacefully in his home September 15, 2020 in Bartlesville, OK. The family will have visitation Friday September 18 from 6pm to 8pm at Stumpff Funeral Home. A graveside service officiated by Dr. Greg Tener will be held Saturday afternoon September 19 at 2pm at Memorial Park Cemetery for anyone who would like to attend. He was born in Altus, OK on December 28th, 1934 to Vernon Milton Pyles and Georgia Lee Adams. After high school he attended Cameron State in Lawton, Oklahoma A&M in Stillwater, and graduated from Central State College in Edmond in 1957 with a B.A. in Economics. While in Edmond he went on a blind date to a football game with Donna Sue Grooms of Bartlesville, who was also attending Central State College. Don and Donna were married on his birthday, December 28th, 1957. Donna felt like this would make him remember their anniversary. In 1961, Don and Donna returned to her hometown of Bartlesville, where they made their home for the remainder of his life. Don enlisted with the United States Marine Corps in 1957, and was stationed in Quantico, VA where he was accepted into the 20th Officers Candidate Class. After adhering to the rigorous requirements in academics, leadership, and physical fitness including the Endurance Course, Don was commissioned as Second Lieutenant. He was then stationed in Okinawa, Japan for 15 months before being assigned to Camp Pendleton in Oceanside, CA. A proud Marine, Don served four years active duty before transferring to the 8th Marine Corps Reserve & Recruitment District where he completed an additional 18 years of service. He retired with the grade of Major after nearly 22 years of accumulated service. He loved many things in life: His country, being a marine, serving his country, his wife, his special granddaughter, and being a Democrat. Being outgoing and able to talk to anyone, he also loved spending time and joking with people whether it be family, friends, or neighbors. As a real estate appraiser for 35 years, it was not uncommon for him to befriend anyone at a gas station while filling his insulated cup with “pop”. Don and Donna are members of First Church of Bartlesville. As an avid sports fan, particularly OSU football, many of his hobbies and traditions were athletic in nature. Some may recall Don as Bill Mingle’s color man on KWON radio for the Bartlesville high school football team and American Legion baseball games. He was also an avid runner who completed two marathons and encouraged his granddaughter to do the same. He and a group of friends began a rich tradition of road tripping to Des Moines, Iowa annually to attend the Drake Relays. That tradition has now spanned 40+ years. The YMCA had a special place in Don’s heart, and he loved going there to “work out” and visit. He enjoyed being an active Jaycee member, and held many different offices. Don was also past Commander of The American Legion. He and Donna enjoyed their western dance group call the Two Steppers, of which he served several terms as President. He was also a master gardener and volunteered at Linneaus Teaching Garden in Tulsa. He was preceded in death by his parents and infant son, Ronald Don Pyles. He is survived by his wife, Donna, and adopted granddaughter, Jenny Beth Jones. In lieu of flowers, a memorial has been established at the Richard Kane YMCA, 101 N. Osage Bartlesville, OK 74003.

Donald M. Pyles, 85, passed peacefully in his home September 15, 2020 in Bartlesville, OK. The family will have visitation Friday September 18 from 6pm to 8pm at Stumpff Funeral Home. A graveside service officiated by Dr. Greg Tener will be... View Obituary & Service Information

The family of Donald Milton Pyles created this Life Tributes page to make it easy to share your memories.

Send flowers to the Pyles family.