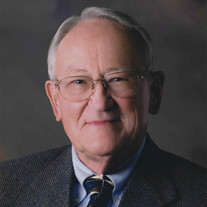 Donald D. Norwood was born on July 31, 1926 in Lamar, MO to Herrell and Maurine Norwood where he was raised and worked on the family farm. He graduated from Lamar High School in 1944 and went on to serve as an infantryman in World War II. He was in the invasion of the Philippines and the occupation of Japan. After the war, he earned a chemical engineering degree from the University of Missouri-Rolla and subsequently married his high school sweetheart, Joan Elizabeth Montee. Don went to work for Union Carbide in Oakridge, TN. Don accepted a position with Phillips Petroleum in Bartlesville, OK in 1956 where they thought it would be a nice place to raise their two young daughters, Donna and Denise. In 1966, Phillips patented Norwood’s loop reactor that allowed for the commercialization of polyethylene and polypropylene plastic that is still being licensed and utilized globally. Don thoroughly enjoyed more than 40 years working side by side with many respected colleagues and was very humbled and grateful when he was presented with the Lifetime Achievement award in 2006 and was inducted into the Plastics Hall of Fame in 2015. Don is preceded in death by his parents, his sister Lois McClintock, his brother H.F. “Jr.”, his wife Joan, his daughter Denise Norwood, and his grandson Scott Frederic. He is survived by his daughter Donna (Gary) Patton of Bartlesville; grandchildren Rachael Frederic Wyatt of Austin; Jennifer (Jeff) Tomlinson of Bartlesville; Jessica (David) Prince of Edmond and Ashley Norwood of Edmond; greatgrandchildren Jadrian and Jillian Tomlinson, Jordan, Aleigha and Dakota Prince, RyLee and Kyrie Norwood, Addison and Emma Klepper; great-great grandson Kingston. He is also survived by his dear friend Margery Maple of Bartlesville. The family would also like to thank his loving and precious caregivers. In lieu of flowers, donations may be made in his honor to Wounded Warriors or Light House Mission. Funeral services will be held at 2 P.M. on Friday, February 26, 2021 in the Stumpff Funeral Home Chapel with Rev. Tari Carbaugh officiating. Interment will be in the Memorial Park Cemetery directed by the Stumpff Funeral Home & Crematory. Come and go visitation for family and friends will be at the Stumpff Funeral Home on Wednesday and Thursday from 9 AM until 8 PM and the Norwood family will receive guests at the funeral home on Thursday from 6 P.M. until.8 P.M.

Donald D. Norwood was born on July 31, 1926 in Lamar, MO to Herrell and Maurine Norwood where he was raised and worked on the family farm. He graduated from Lamar High School in 1944 and went on to serve as an infantryman in World War II.... View Obituary & Service Information

The family of Donald Dwight Norwood created this Life Tributes page to make it easy to share your memories.

Send flowers to the Norwood family.