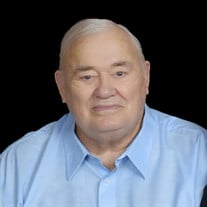 Donald Charles Gibson age 85 passed from this life on May 10th, 2021. Mr. Gibson was born July 6, 1935 to Robert and Letha (Stroud) Gibson in Lawton, Oklahoma. Mr. Gibson was educated in the Tipton and Bartlesville public schools and graduated from Bartlesville College High in 1955. He earned a Bachelor of Science degree from Sul Ross University in Alpine, Texas and a Master of Education degree from Northeastern State University in Tahlequah, Oklahoma. Mr. Gibson was a National Certified Counselor and a member of the National Association of Retired Teachers Association. He was past President of the Burnet County, Tx Teachers Association, past Vice President of the Association of College Admissions Counselors and served on various local education committees. Mr. Gibson was an active member of the YMCA and served on their Board of Directors. He was a Board member of the Civitans, served as treasurer of the Uptown Civitan Elderly Housing Project and in 1999 was honored as Civitan of the Year. Mr. Gibson was a teacher, coach, and guidance counselor who retired in 1996 after 34 years in public education in Texas and Oklahoma. He taught psychology and coached football, track and basketball. About teaching and coaching he often said, “I’m lucky I got to do what I liked to do for thirty-four years.” He loved his students and his athletes and cherished each moment and accomplishment with them. In his later years, these memories gave him great joy and comfort. He loved to reminisce of his coaching days, especially when a former player would visit or call him. Many of them can still hear Coach hollering “phooey” or calling them a “mullet” when they missed the play. He also cared deeply about the students over all well-being. If he saw a student was in need, he would quietly gather resources to help them, often personally buying winter coats and shoes and other necessities. He was honored by the Sooner High Student Council as Teacher of the Year in 1982. Of course, Mr. Gibson was an avid sports fan and enjoyed many outdoor activities. Throughout his years he either played or coached most every sport known to man. Whether watching live or on television, he got an equal amount of joy from a Dallas Cowboys football game as he did a little league baseball game, and he particularly liked it when the underdog won the game. In his retirement, his favorite “sport” was the unofficial men’s hot-tub group at the YMCA where his friends and foes would gather each morning to cuss and discuss current events, sports or whatever topic riled one of them up on that particular day. He was also known for his love of fishing and his collection of more poles and lures and gear than any one man could ever use. His prized 9.4-pound bass mount hung proudly in his house, despite the chagrin of his wife Sharon. He and his son-in-law Terry once won a fishing tournament which made them a legend in their own minds! Whether fishing in the Gulf of Mexico or a little pond around the area, he took great pleasure in setting a hook. Mr. Gibson was preceded in death by his wife Sharon (Vaden) Gibson. They met and married in college and were by each other’s side until her passing in 2014. It has been said that the greatest gift a father can give his children is to love their mother, which he did so for 53 years. He is survived by his daughter, Shelle Lutke and her husband Terry Lutke who was like a son to him; his granddaughter Carisa Kent and her husband Steven and their children Kendall, Kimber and Cole Kent who lovingly referred to him as Big Pa; and his grandson Bradley Lutke all of Edmond, OK.; and several nephews, nieces and cousins also survive him. His younger daughter, Deborah Belin Gibson preceded him in death in 2012, as well as his parents and his brothers Robert and James Gibson. Mr. Gibson was baptized into the Christian faith and carried this belief with him throughout his life. In lieu of flowers, memorials may be sent The Tipton Children’s Home, Tipton OK or Bartlesville Family YMCA. Funeral arrangements are under the direction of Stumpff Funeral Home 1600 SE Washington Blvd., Bartlesville, OK. Visitation will be held Thursday, May 13th from 4 pm to 7 pm at Stumpff Funeral Home. A Memorial Service will be held Saturday, May 15th at 2 pm in the Stumpff Funeral Home Chapel with Pastor Mick Snider officiating.

Donald Charles Gibson age 85 passed from this life on May 10th, 2021. Mr. Gibson was born July 6, 1935 to Robert and Letha (Stroud) Gibson in Lawton, Oklahoma. Mr. Gibson was educated in the Tipton and Bartlesville public schools and graduated... View Obituary & Service Information

The family of Donald Charles Gibson created this Life Tributes page to make it easy to share your memories.

Donald Charles Gibson age 85 passed from this life on May 10th,...

Send flowers to the Gibson family.