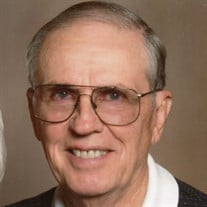 Memorial services will be held at 2 P.M. on Tuesday, December 28, 2021 at the Bartlesville First Church. In lieu of flowers, a memorial fund has been established to Bartlesville First Church, 4715 Price Road, Bartlesville, Oklahoma 74006. Donald D Bruning, (82), of Bartlesville passed away on December 2, 2021. He was born June 10, 1939 to Dale and Doris Bruning of Bruning, Nebraska, the oldest of three children. He graduated from Bruning Public High School in 1957 and farmed with his father for two summers before serving four years in the USAF. Following discharge from the service he attended Dana College at Blair, Nebraska and the U of Nebraska completing his PhD in Physical Chemistry in 1970. While at U of N he met Linda Mae Frank of Harvard, NE and they married on August 3, 1968. This union was blessed with two daughters. He taught chemistry at Pershing College and Midland Lutheran College in Nebraska before joining Phillips Petroleum Company R&D in Bartlesville, OK in 1977. He retired in 2000 after holding various positions in R&D and also spent seven years in the Houston E&P office. Linda, his beloved wife of 28 years passed away in 1996 and in 1998 he remarried to Patricia Lee (Frew) Epperson. While he was a somewhat reluctant traveler he ended up having visited all 50 states and 16 foreign countries as the result of military service, employment locations, business travel, and family vacations. Don enjoyed participation in sports continuing golf and bowling into his later years. He served on the Colonial Estates Homeowners Association board for nine years including four as the president. He worked as a volunteer tax return preparer in the AARP TCE program for 11 years. He enjoyed keeping his yard, fixing things around the house, and improvising “tools” to accomplish the task at hand. A favorite and unusual hobby was creating Excel spreadsheets to solve problems of many different kinds. Don is survived by his wife, Patricia, his daughters and their spouses, Lori and husband Patrick Scott of Houston, TX, Michele and husband Allen Durda of Huntsville, AL, grandsons Caleb, Seth, and Jacob Durda of Huntsville, AL. Also stepchildren Sherry (Epperson) and husband Harley Gray of Bartlesville, Don Epperson of Rockwall, TX, Tammy Epperson and husband Chris Gonzales of Oklahoma City, and step-grandchildren Brad Gray, and Kimberly Jones, John, Chad, Donnie and Baylee Epperson, Sebastian King and step great-granddaughter, Blakely Jones. He is also survived by his sister, Carol Petersen, his brother Gerald Bruning and wife Nancy, and brother-in-law Clyde and wife Diana Frank, all of Lincoln, NE. He was preceded in death by his parents, his first wife, Linda, brother-in-law Paul Petersen, and uncle Victor Bruning.

The family of Donald Dale Bruning created this Life Tributes page to make it easy to share your memories.

Memorial services will be held at 2 P.M. on Tuesday, December...

Send flowers to the Bruning family.