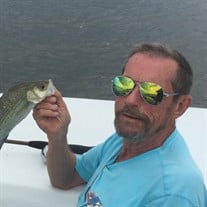 Donald Harry Bennett, also known as Don, Dad, and Pawpaw, 70, of Creek County, Oklahoma died on July 14, 2020. He was born on February 2, 1950 to parents James Andrew Bennett and Irene Clara Todd Bennett in Millville New Jersey. He graduated high school in Waxahachie, Texas. Don was a Vietnam Veteran of the U.S. Army. He served honorably from 1969-1972, including his tour to Vietnam. He married Suzanne Bennett on January 13, 1986. He resided in Hillsboro, TX, from 1986-2010 with his wife to raise their family. He was an incredibly hard worker and dedicated 42 years to St. Gobain Containers as Upkeep over machine operators. Don and Suzanne spent 9 years living a RV lifestyle volunteering for the Texas Corps of Engineers and the state parks. He cherished the bond he had with his veteran buddies, Bob and Larry, who also volunteered at Waco Lake. For several years, they worked together for countless hours of chain sawing trees and pulling out briar. Most of all, with a fish hook in the water or around a campfire, they shared war stories, debated who had the biggest catch, or whose briar vine wounds were the worst. He has priceless memories with family and friends. Over the years, he enjoyed the great outdoors like hiking trails, bike riding, grilling outside, swimming, boating, camping and fishing. A love for nature was shared between him and his wife, children, and grandchildren. He liked spending time in his workshop on projects. He was always willing to help others with their construction projects as well. Don is preceded in death by his father, James Bennett, in 1985; his mother, Irene Bennett, in 2019; and his twin grandbabies, Ian and Savannah Hawkins, in 2006. He is survived by his beloved wife and best friend, Suzanne Bennett; his 4 children including his son, Daniel Wilbur of OK; daughter, Melissa Gann and husband Scott of OK; son, Eric Bennett and wife Brandi of TX; daughter, Malissa Hawkins of TX; his grandchildren Garrett Gann, Sadie and Chloe Gammage, Mallory and Jalen Hawkins, Emma Gann, Carter Bennett, and upcoming birth of Christian DeLuna; a great grandchild, Adalynn Rose Riley; his siblings- brother, Jimmy Bennett and wife Lindy of NJ; sister, Janice Moore and husband Larry of NJ; brother, Brian Bennett of TX; many nieces and nephews; an aunt, Teresa Pierce, all from NJ A memorial service will be held Thursday, July 30 ,2020 at 11:00 a.m. Grace City Church 1945 Old Brandon Rd Hillsboro, TX 76645.The family welcomes donations in his memory to Wounded Veterans of Oklahoma as an expression of sympathy, at woundedveteransofoklahoma.org

The family of Donald Harry Bennett created this Life Tributes page to make it easy to share your memories.

Send flowers to the Bennett family.