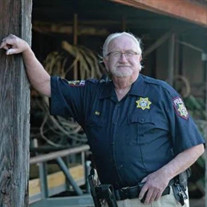 Dennis Lee Nix, 77, of Dewey, Oklahoma, died Sunday, May 22, 2022, in Bartlesville. Dennis was born October 22, 1944, in Ponca City, Oklahoma, to parents George Leo and Juanita Faye (Freeman) Nix. He was graduated from Dewey High School. After high school, Dennis joined the United States Air Force and was honorably discharged in 1966. Following his time in the armed forces, Dennis worked for P66 construction. He then went to work at the Bartlesville Police Department, where he served for twenty years. He then went to the Washington County Sheriff's Office, where he served another twenty years, some of which, he was the Undersheriff. Following his retirement from the Sheriff’s office, Dennis worked at the RSU Campus for ten years all while owning and operating his own security company, Tri-Cross Security L.L.C. Dennis married Peggy Sue Thompson on June 19, 1982. The couple enjoyed over thirty-nine years together. Dennis received several awards throughout his law enforcement career, two of those being Bartlesville Policeman of the year in 1970 and Deputy of the year in 1995. He was also a bomb tech for the city from 1982 to this day, even responding as a bomb tech to the Murrah Building Bombing in Oklahoma City. He was also on the 11th Judicial Drug Task Force. He was a man of integrity and great regard. He was preceded in death by his parents, son Christian Nix and grandchild Taylor Nix. Dennis is survived by his wife, Peggy Sue, of the home; sons Jason Nix and Shane Nix and wife Katelynn; daughter Michelle Sterner and husband Nicholas; grandchildren Khaleah, Jonathan, Nathan, Natalie, Christopher, Genesis, Gabriel, and Benjamin. A come-and-go visitation will be held on Thursday, May 26 from 9 am to 8 pm at Stumpff Funeral Home. Funeral services will be Friday, May 27 at 2 pm at Bartlesville First Baptist Church with interment to follow at the Dewey Cemetery. In lieu of flowers, the family suggests donations in Dennis’s name be made to the Bartlesville First Baptist Church Family Life Recreation Center.

The family of Dennis Lee Nix created this Life Tributes page to make it easy to share your memories.

Send flowers to the Nix family.