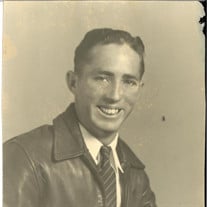 Delbert Riley McKinney, age 96, passed away after a long and well-lived life on May 15, 2022. He was born August 19, 1926, to James Wilson and Frankie Maud (Manire) McKinney in Liberty, Texas. Due to his father having to constantly move for work during the great depression, Delbert was able to acquire a sixth-grade education and start work at an early age, he was an extremely hard-working and industrious man and was able to start and run his own ceramic tile business: McKinney Tile Co. LLC. On August 18, 1950, he became an incredibly lucky guy, he married his sweet bride, Sarah “Sally” May McKinney. They raised two sons and were able to teach them the ceramic tile business. He was a devoted Christian man who enjoyed and loved God, his family, and the great outdoors more than anything. He was an active member of the Church of Christ for most of his adult life. He loved fishing and hunting, especially when he was able to share those activities with his family and friends. One of the things he enjoyed most of all was being able to share what he acquired during his hunting and fishing adventures with his family, friends, and fellow church members. Delbert was always the brightest smile in the room, and was rarely caught without one on his face, he told everyone who would listen how thankful he was for such a blessed life he had and how proud he was of his sons and his family. According to him, he had the best life a man could ask for. He was a great man, husband, father, grandfather, and great grandfather. He is preceded in death by his father J.W. McKinney, Mother Frankie (Manire) McKinney, brothers, Ota Ray McKinney, James Loyd McKinney, Noble Howard McKinney, and Arthur Frank McKinney, his son Buddy McKinney, and his wife Sarah May McKinney. Delbert is survived by his son, Del McKinney, and children, Justin King, Cheree King, Amber King Stephen, and their children and great-grandchildren, his son Tom McKinney and wife, Marylou McKinney, and children Jeremy McKinney, Julie McKinney, Daniel McKinney, and their children. A memorial service will be Friday, May 27, 2022, at 2:00 PM, at Stumpff Funeral Home and Crematory.

Delbert Riley McKinney, age 96, passed away after a long and well-lived life on May 15, 2022. He was born August 19, 1926, to James Wilson and Frankie Maud (Manire) McKinney in Liberty, Texas. Due to his father having to constantly move for... View Obituary & Service Information

The family of Delbert Riley McKinney created this Life Tributes page to make it easy to share your memories.

Delbert Riley McKinney, age 96, passed away after a long and...

Send flowers to the McKinney family.