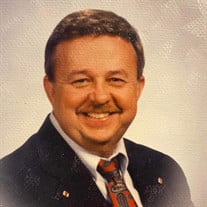 DeLacey F. Smith (“Dee”), age 79, passed away on February 5, 2022, at Jane Phillips Hospital with his family and friends by his side. His death was preceded by his wife’s, Louise Ann Smith, death on August 20, 2021. Dee and Louise were married in April 1964, 57 years of love and laughter. Dee was born on July 5, 1942, to Ruth Ann Smith and Forest Paul Smith in Bartlesville, OK. Dee graduated from College High School. Bartlesville, OK in 1960. Dee opened Weeze’s Café with his wife, Louise, in October 1995. They both continued to manage Weeze’s Café shortly before passing to be with the Lord. They both loved to build relationships, visit with customers, and support the community. They considered all customers as family. Dee also had a lengthy employment with Phillips 66 Petroleum Company in earlier years before retiring after 35 years of dedicated service. Dee was Father to two sons, Bryce Kent (married to Natosha Barham) and Scott Beau (married to Alexandria Tuerel Jaudiness). Dee and Louise had a very special place in their heart for their grandsons, Bryce David, Colten, and Quintin, and granddaughter, Kayla, in addition they had three step-grandsons, Weston, Landon, and Jailen. Dee and Louise loved their grandchildren dearly and loved to spend every moment possible spoiling them. Dee was a very successful business entrepreneur, and successful at every thing he did. He was a very talented water skier and could do tricks skiing. Dee served as a Grand Knight in the Catholic Church’s Knight of Columbus at St. John’s Church in Bartlesville, OK. Dee also built a very successful men’s slow-pitch softball team named Murphy’s Steak House. They won several tournaments in and out of State and came in 3rd in the Men’s Oklahoma State “A” Division tournament. They were also featured on Tulsa’s News Channel 8. Dee also served our great nation in the U.S. Army Reserves from February 1964 to September 1967. Dee also started the Bartlesville YMCA Prep-football league, built the existing baseball field located adjacent to Tuxedo Boulevard, and coached several youth baseball, football, and basketball teams in Bartlesville, OK. Dee coached both of his sons in prep football and baseball. Dee was also a major contributor to the field maintenance at the Doenges Ford Injun baseball field while his son, Bryce, played for the American Legion Baseball team. Dee was also an accomplished welder, worm farmer, and entrepreneur selling various pool products and truck dumpster mechanical devices. Dee was also King of the Karaoke where he loved to play the Blue Brothers with his long friend Johnny Henshall. They would travel the State singing in different competitions and events. He loved to sing the blues, especially BB King and Stevie Ray Vaughn, and was also in a band called “Dee and the Midnighters.” Dee prided himself in caring for his 10-acre home, where he raised horses, pigs, ducks, chickens, and various dog breeds. He loved his two newest dogs Rocky & Rowdy and the family cat Carebear. His passion was mowing with his zero-turn Grasshopper mower where he found peace, solitude, and happiness. Dee was also an avid hunter where he loved to hunt pheasant, quail, and deer. Dee also had a big heart often providing money and/or food, or whatever a person may need regardless of if he knew them or not. He showed love for his family and friends, and would do anything in his power to make sure they were happy and taken care of. Dee had one Sister, Judy Stephens, and two Nephews, Joshua, and Justin Stephens. Dee is preceded in Death by his mother and father, Ruth Ann Smith, and Forest Paul Smith respectively, and his wife Louise Ann Smith. Dee is survived by his two sons and grandchildren. He loved his family dearly and is loved by many and will be missed by many within the community. A lunch will be held at the Church immediately after the service.

The family of Delacey Forest Smith created this Life Tributes page to make it easy to share your memories.