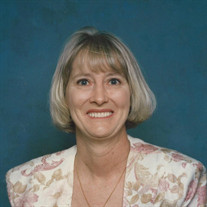 Deborah Elaine “Debbie” (Sheets) Lacey, 70, of Bartlesville, passed away on May 5th, 2022 after a long battle with cancer. Debbie was born in Bartlesville on April 22, 1952 the daughter of Ross Edgar and Helen Elizabeth (Hailey) Sheets. She grew up and received her education in Dewey, graduating from Dewey High School in 1970. She was employed at Phillips Petroleum Company in the credit card division for many years. She later went back to school and obtained her Bachelor’s Degree in Education from Northeastern State University. She taught for several years with the Bartlesville Public Schools. She married Jerry Lacey on May 30, 2003 and they made their home in Bartlesville. Debbie’s boys and grandchildren were the light of her life. She was a great caretaker to her mother and sister during their battles with illness. She was looking forward to the arrival of her great granddaughter in July. Survivors include her son, Jason Rischard, of Bartlesville, one sister, Elizabeth “Beth” Sheets Gray and husband Jimmy of Bartlesville, three sister-in-laws, Martha Knierihm of Hennessey, OK; Joey Morgan and Carol Burwell of Bartlesville; one brother-in-law, Bobby Lacey; four grandchildren; Matthew Rischard of Hampton, Virginia, Jaycee Rischard, Aubrey Rischard and Jaxon Rischard, all of Bartlesville and several nieces and nephews. She was preceded in death by her parents, one brother, David Sheets, one sister, Becky Sheets Richardson, her son, Matthew Lee Rischard and her husband, Jerry Lacey. A celebration of life will be held at a later date in July. Cremation services are under the direction of the Stumpff Funeral Home & Crematory.

Deborah Elaine &#8220;Debbie&#8221; (Sheets) Lacey, 70, of Bartlesville, passed away on May 5th, 2022 after a long battle with cancer. Debbie was born in Bartlesville on April 22, 1952 the daughter of Ross Edgar and Helen Elizabeth (Hailey)... View Obituary & Service Information

The family of Deborah Elaine Lacey created this Life Tributes page to make it easy to share your memories.

Send flowers to the Lacey family.