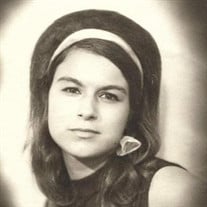 Deborah (Debbie) May Brown passed away surrounded by her loved ones on November 9, 2021, in Bartlesville, Oklahoma at age 69. Debbie was born on December 31, 1951, to Walter White and Mary Secondine in Ponca City, Oklahoma. Debbie graduated... View Obituary & Service Information

The family of Deborah May Brown created this Life Tributes page to make it easy to share your memories.

Deborah (Debbie) May Brown passed away surrounded by her loved...