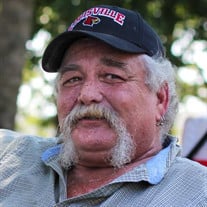 David Lee Vaughan, 59, of Anderson, Missouri, died on Tuesday, November 24, 2020. He was born in Nowata, Oklahoma to parents Howard “Bud” Vaughan and Patricia “Pat” (Kelley) Vaughan on September 30, 1961. David graduated from Nowata High School in 1980. He was saved and baptized at the First Baptist Church in Nowata. On July 2, 1982, he married Marggie Laughlin. David worked in construction for Bellco Construction and as a truck driver. He owned his own semi and trailer and contracted with numerous trucking companies. David was incredibly hard working and even received an award for his safe driving. A person accomplishment of David was reading through the Bible and studying the books of the Bible multiple times. He worked with children at his church in Missouri. When he had free time, he enjoyed fishing. He loved watching the Oklahoma Sooners, the St. Louis Cardinals, NASCAR and anything his boys were interested in. The births of David’s sons and grandsons were some his proudest moments. He is preceded in death by his maternal grandparents, George Kelley and Maudie Kelley, and his paternal grandparents, Howard Vaughan and Thelma Vaughan Fry. David is survived by his wife Marggie of the home, sons Michael Vaughan of Jay, Oklahoma, Jeremy Vaughan of Afton, Oklahoma, Josh and his wife Sue, grandsons Easton and Karsyn Vaughan of Vincennes, Indiana, his parents Bud and Pat Vaughan, brother Kevin Vaughan of Nowata, Oklahoma, sister Tammy Waddle and husband Ron of Bartlesville, his nephews and his only niece, his aunts and uncles and cousins. David loved everyone, especially his family. Each and everyone of them were so important to him. Visitation will be held from 9am – 8pm, the family will greet guests from 6 – 8pm, at the Stumpff-Nowata Funeral Home. A graveside service will be held on Tuesday, December 1, at 2:00 pm at the Nowata Relocated Cemetery.

The family of David Lee Vaughan created this Life Tributes page to make it easy to share your memories.

Send flowers to the Vaughan family.