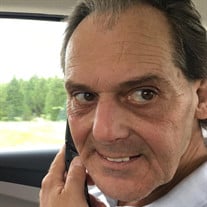 David Earl Rorick, 58, of Boley, Oklahoma, died on Sunday, June 21, 2020. He was born on April 7, 1962 in Lawton, Oklahoma to parents Robert Rorick and JoAnn Jordan Rein. He graduated from Sooner High in Bartlesville, Oklahoma in 1980 and briefly attended Oklahoma State University in Stillwater, Oklahoma. David was always able to make friends easily. Growing up, David was a member of the Boy Scouts and enjoyed playing baseball. He loved to read the Bible and spent time preaching in his later years. David always looked forward to visiting and talking with family and friends. He enjoyed going to the dinners held at Hillside Christian Church in Nowata, Oklahoma. He had a difficult life due to illness, but he still made the most of it. David was a special person to all who knew him. He was very well-loved by everyone at the Stepping Stone facility in Boley, Oklahoma and will be missed dearly by all who knew him. David is preceded in death by his uncle, Lloyd Jordan and aunt, Linda Mosher. He is survived by his mother, JoAnn Rein of California, stepfather Larry Rein of California, his father Robert Rorick of Virginia, brother Charles Rorick, sister Tammy Thompson of Oregon, niece Mary Cole of California, Aunt Glenna Hitchcock, cousins Danny and Jim Jamison, uncle John R. Jordan and wife Judy and their children, aunt Evelyn Jordan and family Terry, Donna and Dianne. Visitation was held on Thursday, June 25 from 3pm to 8pm at Stumpff-Nowata Funeral Home. Funeral services will be held Friday, June 26, also at Stumpff-Nowata Funeral Home at 10:30am with interment to follow at the Nowata Memorial Park Cemetery. Friends who wish may sign the online guest book and leave condolences.

David Earl Rorick, 58, of Boley, Oklahoma, died on Sunday, June 21, 2020. He was born on April 7, 1962 in Lawton, Oklahoma to parents Robert Rorick and JoAnn Jordan Rein. He graduated from Sooner High in Bartlesville, Oklahoma in 1980 and briefly... View Obituary & Service Information

The family of David Earl Rorick created this Life Tributes page to make it easy to share your memories.

Send flowers to the Rorick family.