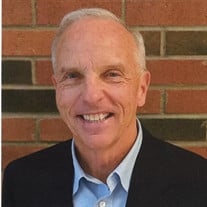 David L. Hammonds was born June 20, 1951, in Toledo, Ohio. He grew up in Ai and Swanton, Ohio and then moved with his family during his junior year of high school to Nederland, Texas where he graduated high school. He attended college at Lubbock, Texas where he would meet and marry his sweetheart, Shirley Garrison from Kansas City, Missouri. Dave and Shirley would later transfer to Oklahoma Christian University where they would both graduate. Upon completion of college they moved to Bartlesville, Oklahoma where Dave would serve as Youth Minister for what was then the Sixth and Dewey Church of Christ, later to become the Woodland and then the Adams Blvd. Church of Christ. Dave would hold several positions there over the years. He would later serve as minister for the Legacy Church of Christ. Dave is survived by his wife, Shirley of the home, his son, Shawn Hammonds and wife Amy of Bartlesville, Ok., one son in law, Sidney of Houston and four grandchildren; Easton Hammonds of Bartlesville, Baylor Williams, Sutton Williams and Kinsley Williams of Houston. He is survived by one sister, Cheryl Everett of Traverse City, Michigan and two brothers, Don Hammonds and his wife Tesha of Grand Junction, Colorado and Jeff Hammonds and his wife Camille of Huntsville, Texas and a number of nieces and nephews. He was preceded in death by his father, James Hammonds, his mother Willa Dean Hammonds his four brothers Ron Hammonds, Jerry Hammonds, Jimmy Hammonds and Mike Hammonds, and his daughter Heather Williams. A memorial service will be held Friday, January 28, at 2 p.m., at Adams Boulevard Church of Christ in Bartlesville, and is under the direction of Stumpff Funeral Home and Crematory. As most people know Dave had a passion for Osage Christian Camp, as last year he directed his 45th session. In lieu of flowers, the family asks donations to be made to Osage Christian Camp. Checks can be mailed to: 505 Chisholm Circle, Bartlesville, OK 74006 Legacy Touch: DWQHFPXJ

David L. Hammonds was born June 20, 1951, in Toledo, Ohio. He grew up in Ai and Swanton, Ohio and then moved with his family during his junior year of high school to Nederland, Texas where he graduated high school. He attended college at Lubbock,... View Obituary & Service Information

The family of David Lecil Hammonds created this Life Tributes page to make it easy to share your memories.

Send flowers to the Hammonds family.