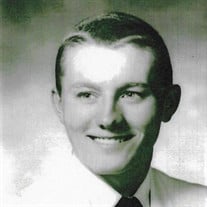 Daris K. Kerbs, age 74, passed away at his home in Bartesville, Oklahoma on Friday, October 9, 2020. Daris was born June 5, 1946 in St. Anthony, Idaho to George J. and Bertha L. Neiderhaus Kerbs. Daris grew up on the family farm with his three brothers and two sisters. Daris attended elementary school in Wilford and graduated from South Fremont High School in 1964. Daris was a great athlete, playing basketball and football at South Fremont. After high school, he attended Idaho State University where he pledged the Sigma Phi Epsilon Fraternity. Daris loved sports and loved Idaho. He was beside himself with joy when Boise State beat the Oklahoma Sooners in a last second touchdown of the 2007 Fiesta Bowl. Daris was a member of the Idaho National Guard, 116th Combat Engineer Battallion. At the age of 22, he was activated to Vietnam, based in the Central Highlands (jungle) with Company C (St. Anthony) in the base camp beside the village of B’sar. He proudly served his country from 1968-1969. After his honorable discharge, Daris returned to his wife, Anna Jo Pierce (Jody) and a little baby girl. He spent a few years logging and farming. On June 5th, 1976 (his birthday), the Teton Dam broke, ending his farming career. In 1977, he left Idaho with Jody and 4 little girls to Bartlesville, Oklahoma (Jody’s home) where he began working in oil production until his retirement in 2015. Daris and Jody eventually divorced. He later married Patricia Dempsey and to this union was born a son. They later divorced. Daris enjoyed hunting, fishing, traveling and especially enjoyed riding his motorcycle. He had a great sense of humor that was contagious to all who knew him. He will be remembered for his entertaining stories about his childhood growing up on the farm with his siblings, wild escapades with his friends, his teasing jokes, his generous laugh, his unfailing work ethic and his service to this great country for which he loved. Daris was preceded in death by his grandparents Henry & Elizabeth Kerbs and Jacob & Kathryn Neiderhaus, parents George & Bertha Kerbs, brother-in-law Fred Griffle and nephew Rick Griffle. He is survived by his children Daradi Kerbs, Gretchen Kerbs, Joanna (Gene) Peters, Jennifer (Chip) Brown and Dustin (Nicole) Kerbs; grandchildren Dillon Magdelano, Trevor Peters, Kelby (Jimmy) Zimmerman, Dayton Kerbs and great-grandaughter Adeline Zimmerman; siblings Larry (Deanna) Kerbs, Duane (Lynda) Kerbs, Gary (Doddie) Kerbs, Sharon Griffle and Linda (George) Crapo; several nieces and nephews whom he loved dearly, they in turn loved him and had many happy times with their Uncle Daris. His family will celebrate his life in early Spring of 2021, where they will carry out his wishes of having his ashes spread in the beautiful Teton Mountains, in his home state of Idaho. Dad, Grandfather, Brother, Uncle and Friend may your soul rest in peace!

Daris K. Kerbs, age 74, passed away at his home in Bartesville, Oklahoma on Friday, October 9, 2020. Daris was born June 5, 1946 in St. Anthony, Idaho to George J. and Bertha L. Neiderhaus Kerbs. Daris grew up on the family farm with his three... View Obituary & Service Information

The family of Daris K. Kerbs created this Life Tributes page to make it easy to share your memories.

Send flowers to the Kerbs family.