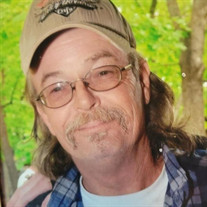 Mr. Danny “Smokey” Hill Danny Dewayne Hill, age 62, of Barnsdall, Osage County, passed away on July 21, 2021. He was born on March 16, 1959, in Wynnewood, Oklahoma, to Calvin Lynn Hill and Arvilla Mae (Miller) Clapp. Danny received his GED from Barnsdall High School and worked most of his life as an auto mechanic. Danny “Smokey” Hill was a man who loved the outdoors and nature. He enjoyed fishing and hunting deer. His favorite was squirrel hunting with his terrier “Junebug”. Other things he enjoyed doing each day was sitting on the porch watching the birds at the feeders he kept full. One of his greatest enjoyments was playing music with his friends on his Fender Guitar. Danny is preceded in death by his father Calvin Hill, his mother Arvilla Clapp, and his brother James Dale Hill. Danny is survived by his three sisters, Dianna Thornburg of Fairfax, Peggy Hill of Barnsdall, and Patricia Reeves, and husband Tony, of Barnsdall; His nephews, Christopher Thornburg, Zachary Hill, Johnny Reeves, Luke Reeves and Jason Dolen; two nieces, Angie Frazee and Bobbi Reeves, and great-niece and nephews, Blayre Reeves, Jagger Reeves, and Hayden Reeves. Smokey's lifelong friend he considered same as a brother was Jackie Whinery. But he had many friends throughout Osage county he considered best buddies and family. Graveside services will be held on Saturday, July 31, 2021, at 10 am at the Ethel Reece Cemetery in Barnsdall.

The family of Danny "Smokey" Dewayne Hill created this Life Tributes page to make it easy to share your memories.

Send flowers to the Hill family.