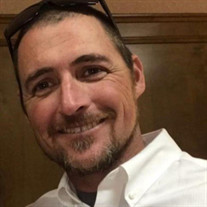 Daniel “Danny” Earl Lee, age 44, of Bartlesville, Oklahoma was called to his heavenly home on the afternoon of June 13, 2022. Daniel Earl Lee was born to Robert Earl Lee and Barbara Jean (Keller) Lee on May 7, 1978 in Bartlesville, Oklahoma. He spent his childhood in Copan, Oklahoma where he enjoyed soccer, baseball, building and riding bikes. He was a graduate of Copan High School Class of 1996. Upon graduation, Danny owned a fencing company, then became a firefighter for the Bartlesville Fire Department. Later, Danny worked at Lee Construction along side his father, Robert, for several years before beginning his career as a job superintendent with Crossland Construction Company in 2016. On May 19, 2012, Danny married his best friend and love of his life, Dana (Baughman), and was blessed with two sons, Tryston Ryan and Skyler Dean. They made their home outside of Bartlesville on ten acres. Danny loved building and driving rock crawlers and working in his shop alongside his friends. He also enjoyed riding motorcycles. Danny had an immense passion for worshiping and serving God at Dewey First Christian Church. Danny had an unconditional love for his family and devotion to his wife and sons. To know Danny was to love him. He always had a smile on his face, a kind word and a witty comeback. Danny was a loving husband, devoted father, gracious son, wonderful brother and a friend to all. Anytime someone would ask Danny how he was doing, he would always reply, “fantastic” and “fantastic” is exactly how Danny was. He is proceeded in death by his maternal grandfather Bill Keller; paternal grandfather Dean Lee; grandmother Barbara “Bobbie” Lee; and uncle Donald Keller. He is survived by his wife Dana Lee; his two sons Tryston and Skyler; mother Barbara Lee; father Robert Lee; brother Kenny Lee and wife Amanda; sister Melissa Davis and wife Thresa; maternal grandmother Ruby Moody, nieces Taylor Davis, Riley Davis, Sheridan Elsberry, Mallory Jones, and Rylee McClintock; Nephews Wyatt John Lee and Rhodes Baughman; aunts and uncles Sue and Charlie Lee, Kathy and Keith Sims, and Tricia and Paul Moses; cousins Carl Lee, Sarah Hendrix, Amy Fiksel, Chris Keller, Scott Sims, Kevin Sims, Brian Sims, Hayden Moses, and Weston Moses; great-niece Azlyn Fletcher and great-nephew Kynderson Torix; mother-in-law Sheryl and father-in-law Rod Baughman; and his two sisters-in-law Brandy McClintock and husband Travis and Brook Baughman. A visitation will be held Friday, June 17 from 9:00 AM to 7:00 PM, the family will be there from 5:00 PM to 7:00 PM to receive guests.

The family of Daniel Earl Lee created this Life Tributes page to make it easy to share your memories.

Send flowers to the Lee family.