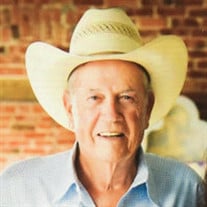 Danny Wayne Hayes, cherished dad and gramps, passed away in McAlester, OK on May 4th, 2022. Danny was born on October 7th, 1938 in Fletcher, OK to Daniel Francis and Mattie Coleen (Love) Hayes. He had endless stories and fond memories of growing up on the family farm where he was born. Danny received his education in Fletcher, graduating in 1956. In 1957, Danny married Johnnie May Finley. The young couple moved to the Bartlesville area in the late 50s, when Dan began working at Dewey Portland Cement Company. Soon after, he worked finishing houses before opening Dan's Service Paint Center, which he operated for 20 years. After a brief attempt at retirement, he worked a few additional years as a contractor for Phillips. Anyone who knew Dan knew that horses were his passion. From bulldogging in his younger years to training, riding and competing with cutting horses for the past 35 years, winning numerous NCHA and WCHA championships and awards. He was also passionate about his position as Director and Treasurer of the Caney Valley Conservation District Board, where he served from 2010 until his passing. Dan leaves behind: 3 adoring children, daughter Terry Hamilton and husband Ray of Carrollton, TX, son Justin Hayes of Owasso, daughter Dana Bowen and husband Sean of Owasso; 6 treasured grandchildren, Cory Hamilton and wife Victoria of Little Elm, TX, Dannie Hamilton of Carrollton, TX, Jackie Lafferty of Caney, KS, Chase Bryan and wife Ellie of Bartlesville, K'Cie Rainwater of Collinsville, and Finley Bowen; great-grandchildren Remington and Hayes Hamilton; siblings Mary Stroud of Perry, brothers Joe Hayes and Lawrence Hayes of Fletcher; numerous loving relatives, friends, and his beloved horse, Gray. He was preceded in death by his parents and loving wife of 57 years, Johnnie May. Dan's life will be celebrated Tuesday, May 10th, 2pm, at Prairie Song in Dewey with burial following at Dewey Cemetery.

Danny Wayne Hayes, cherished dad and gramps, passed away in McAlester, OK on May 4th, 2022. Danny was born on October 7th, 1938 in Fletcher, OK to Daniel Francis and Mattie Coleen (Love) Hayes. He had endless stories and fond memories of growing... View Obituary & Service Information

The family of Dan "Danny" Wayne Hayes created this Life Tributes page to make it easy to share your memories.

Send flowers to the Hayes family.