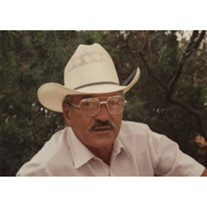 Funeral services for Dale W. Jones, 81 of Skiatook, Oklahoma were held Wednesday, January 25, 2012 at 11:00 a.m. at Peters-Stumpff Funeral Home Chapel with Russell Hill officiating. Interment in Osage Garden Cemetery, in Skiatook, Oklahoma was under the direction of Peters-Stumpff Funeral Home. Casket bearers for the service were Shane Brown, Guy Stewart, David Stewart, Brad Jones, Matthew Jones and Ross Hall. Musical selections for the service were "All In All" with Jann Jones as pianist, "My Blue Heaven" and "Go Rest High On That Mountain". Dale passed away on January 23, 2012 at his residence. He was born September 15, 1930 to Clarence K. and Effie (Mason) Jones in Hominy, Oklahoma. He was raised in Wildhorse, attended Wildhorse School, graduating in 1948 among a class of 12. He had worked in a peach orchard as a youngster and at 13 bought his first car, a 1929 Model A Roadster. He attended Oklahoma Baptist University in Shawnee for a time. At the end of the spring semester he bought a 1948 1 1/2 ton truck and went to the wheat harvest. It rained all that summer and he was forced to sell his truck to a bootlegger who paid him in cash with $20. bills. He went to work for Sears in 1951 in Tulsa in the sporting goods department but was drafted into the army in 1951. He served his tour of duty in Germany and was able to visit several other countries while he was overseas. He was discharged April 23, 1953. In mid 1953 he went to work at McDonnell Douglas Aircraft, Tulsa, as a draftsman in Engineering. He worked some of the time in St. Louis and having his pilot's license flew himself home to Skiatook on weekends. When Dale's children were young, they enjoyed traveling and camping across the country, a hobby he enjoyed throughout his retirement. He worked with the Boy Scouts with his sons, driving the bus on long-distance trips. In 1987 he was divorced and in May of that year retired from McDonnell Douglas after 33 years. He did some "job shopping" for Boeing for a few years before actually retiring. In August, 1993 he married Betty Pock and they made their home on North John Zink in Skiatook for 18 good years. Dale loved old cars and at one time had 4 Model A's and belonged to the Model A Club of Tulsa. He and his stepson totally restored a 1954 GMC from the frame up. They had newly painted pieces of the truck on the guest bed, dining table, and any other available space in the house. He enjoyed going to car shows and won several awards for his own cars. He was generous to anyone who needed help rather family or friend. He was known for his jokes, his funny stories and his "unique' way of saying things. Most afternoons he would go around town to a couple of places he enjoyed and visit with his friends. Those things and Dale will be missed so very much by his family and many friends who loved him. Dale is survived by his wife Betty of the home, 2 sons and daughters-in-law: Jeff and Terri Jones of Skiatook; Jay and Liz Jones of Mustang; a daughter Jill Jones of Tulsa; 5 grandchildren: Jann Jones, Joni and husband Ross Hall of Skiatook; Brad Jones and wife Amanda, Matthew Jones and Sarah Jones all of Mustang, OK; 6 great grandchildren: Blythe and Diesel Hall of Skiatook; Jerry, Haidyn, Jennifer and Abbie Jones all of Mustang. He is also survived by 2 sister-in-laws: Bunnie Jones of Houston and Thelma Jones of Prue; 2 step-sons: Guy Stewart of Skiatook; David Stewart and wife Sharon of Grove, 1 step-daughter and husband: Lisa Brown and Jack Martin of Skiatook; 3 step-grandchildren: Shane Brown of Skiatook; Melissa Williams and husband Josh of Grove; Lindsay Stewart of Grove, 4 step-great grandchildren: Whitney and Jada Williams, Gage Farmer, and Mason Philpott, all of Grove; several nieces and nephews and many friends. He was preceded in death by his parents, 2 brothers: Raymond and Wayne Jones, and step granddaughter Allison Philpott. www.Peters-Stumpff.com

The family of Dale W. Jones created this Life Tributes page to make it easy to share your memories.