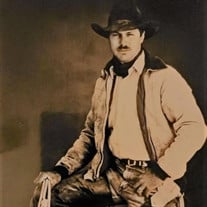 Cole Van Brooks, age 60, of Nowata, Oklahoma, died January 4, 2021. He was born to Plez Ollis Brooks Jr. and Mollie Hugh (Cole) Brooks on January 2, 1961 in Temple, Texas. He married Pamela on March 1, 2012 (Not Near Long Enough). Cole was employed as a Paramedic with Nowata Ems since 2012. He was a rough around the edges cowboy, a paramedic, a husband, a father, and a best friend to many. Cole loved his family and friends, he loved raising his dogs and taking them hunting. He loved to read and to travel. Cole was proud to serve his community and spread his dad’s word. Cole has spent his life working on ranches. Most recent was for Bill and Diana Helm at Helm Quality Cattle here in Nowata County. He spent years working for Babbitt Ranches in Arizona and Phantom Ranch in the Grand Canyon packing supplies and tourist in and out of the canyon. Cole spent his last half of his life saying it was his biggest job to spread dad’s word. Everywhere we traveled while in Houston at MD Anderson going through Chemo and Radiation. He spent most of his time visiting with other patients and talking about the Lord and the Kingdom. He touched the hearts of everyone he came in contact with from all the across the world. Cole is preceded in death by his parents, Plez Ollis Brooks Jr., and Mollie Hugh Cole Brooks. He is survived by his wife Pamela Brooks, Daughter, Ayla Martin of U.K, Three sons, Seth Hughes Brooks of Nowata, Ok, Caleb Michael Brooks of Tulsa, Ok, and Tyler Brooks of Anaconda, Montana, Stepson, James Richmond of Bartlesville, Ok, Stepdaughter, Ty Richmond of Moore, Ok. A celebration of life will be held on Saturday January 16, 2021 at 2:00 PM at the Nowata Fire & EMS Annex. In lieu of flowers, the family suggests making donations to Countryside Ministries in Cole's name. These donations go to Gideon's Bibles to make sure that all hotels, hospitals and soldiers have the Word of God, as this was mission was very close to his heart.

The family of Cole Van Brooks created this Life Tributes page to make it easy to share your memories.

Send flowers to the Brooks family.