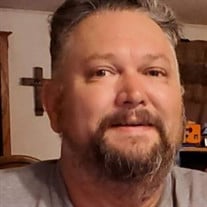 Clifford Edens passed away on October 9, 2021, at Jane Phillips Medical Center in Bartlesville, Oklahoma at the young age of 43. Cliff was born to Bill Edens and Jerry Lunsford on June 24, 1978, in Templeton, California. Cliff attended Independence Community College earning an Associates's degree. He later continued his education at Oklahoma Wesleyan University where he earned his bachelor’s degree in business administration with a minor in human resources. He also owned and operated his own business, Sodbuster Tank Strapping LLC. Cliff had a true love for life, he enjoyed karaoke, woodworking and refinishing furniture, traveling, trying food at new destinations, cooking, and bowling with family, but he loved being with his family more than anything else. Cliff was family-oriented and had a great love for his sister and nieces. Cliff specifically was ordained as a minister to officiate his sister’s wedding and had even taken her to Washington D.C. on a school trip. His most proud moment was having the honor to name his sister. He is preceded in death by his paternal grandparents, Chub and Nora Edens, his maternal grandparents, Webb and Jean Lunsford, three aunts, and his uncle Jesse Abrams. Cliff is survived by his parents Bill and Jerry Edens, his sister and brother-in-law, Brooke and Shane McSperitt, two nieces, Shaylee and Sloane McSperitt, nephew Stratton McSperitt, seven uncles: Robert and wife Mary Alice Chaffe, Tony and wife Glenda Chaffe, Doc and wife Patti Edens, Ronnie and wife Denise Lunsford, Lee Lunsford, and Kelly Lunsford, his aunt Anne Chaney, and numerous cousins. A memorial service will be held Saturday, October 16, 2021, at 2 PM at the Stumpff Funeral Home Chapel and is under the direction of Stumpff Funeral Home and Crematory. In lieu of flowers, please consider making a donation to his nieces and nephew’s college fund in remembrance of Cliff Edens.

Clifford Edens passed away on October 9, 2021, at Jane Phillips Medical Center in Bartlesville, Oklahoma at the young age of 43. Cliff was born to Bill Edens and Jerry Lunsford on June 24, 1978, in Templeton, California. Cliff attended Independence... View Obituary & Service Information

The family of Clifford Oscar Edens created this Life Tributes page to make it easy to share your memories.

Send flowers to the Edens family.