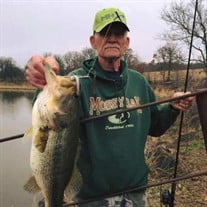 Cleve (Dale) Javine, 80, of Barnsdall, Oklahoma, died Tuesday, May 17, in Tulsa, Oklahoma, Dale was born in Barnsdall on October 29, 1941, to Owen Kemper and Wilda Oliva (Lawman) Javine. He began his education in Severy, Kansas, later transferring to Barnsdall where he finished high school in 1959. He attended NEO A&M, Miami, Oklahoma, where he majored in Chemistry, a field that would lead him into employment with Phillips Petroleum Company, later Conoco Phillips. Dale retired from his position as Laboratory Technician in 1999, after thirty-seven years with the company. His service was notable, as evidenced with an innovative patent design in oil and gas production for Phillips. In 1962, Dale married Jane Ayres. They became the parents of two children, Cleve and Mikki. He was enormously proud to be an avid sportsman; he thoroughly enjoyed hunting, fishing, searching for arrowheads, or any type of sports. One of his proudest moments came in 2021, he harvested his one-hundredth deer. Dale had continued to immerse himself in sports activities with his children and grandchildren. He instilled in them the same love he felt and spent many enjoyable hours watching and “coaching” them from the sidelines. From the words of Joe Gilbert, long-time coach of Barnsdall teams, “I could not have done it without the help of the Dale Javines.” Dale consistently helped with field maintenance, using his personal equipment to keep the area dressed and clear of unsightly debris. The 1980 State Championship baseball team might even recall their time with Dale’s coaching throughout their little league play. The community at large enjoyed the Dale’s abilities to fix and replace things when need arose. He was known to very quietly lend his ability as an electrician, a cleaner of streets after a snowstorm, or one who mowed an overgrown plot. He retired from the Barnsdall Volunteer Fire Department with a 20-year service award. For forty-five years, Dale was a Perpetual Third-Degree Master Mason, most recently affiliated with the Ramona Lodge. Dale was a member of the First Christian Church of Barnsdall and was a proud member of the Osage Tribe. Dale is survived by his wife Jane, his son Cleve and wife Janice; his daughter Mikki LeFlore of Barnsdall; four grandchildren; Cortney and husband Colin Walden of Stillwater, Justin Javine, LaKeesha and Cody Klutts, Kyndal LeFlore of Barnsdall; five great grandchildren; Dax Walden, Jett Walden, Paycie Javine, Gemma Javine, and Navee Javine. He is also survived by his brother, Joe Javine, sister, Elaine and husband Kenneth McPherson, Ronda and husband Gary Blake of Barnsdall, along with a special friend and faithful follower – his dog Osage Samm. They were a couple well-known around town, especially at the softball field, retrieving all the foul balls and home run balls. A Celebration of Life will be held at the First Christian Church in Barnsdall Tuesday, May 24, at 2:00 p.m. Place of interment will be the Javine Cemetery, at a later date. Memorial contributions may be made to the First Christian Church, P.O. Box 725, Barnsdall, Oklahoma 74002.

The family of Cleve "Dale" Javine Sr. created this Life Tributes page to make it easy to share your memories.

Send flowers to the Javine family.