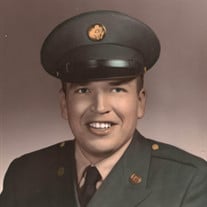 Chester Leon Whitmire Jr. passed away March 10, 2022, in Nowata, Oklahoma at the age of 82. He was born to Chester Leon Whitmire Sr. and Josephine Beatrice Thorton Whitmire on November 7, 1939, in Tahlequah, Oklahoma. Chester attended school in Haskell and later graduated in 1960 with a diploma in electricity. Chester served in the United States Army until he was honorably discharged on November 30, 1967. As an Electrician he worked for McDonald Douglas in Tulsa, later working for Reda Pump in Bartlesville, OK. On November 4, 1967, Chester married the love of his life Marilyn (Marrs) Whitmire whom he spent 55 years with. He enjoyed fishing, hunting, golf, bowling, watching SOONER football and most of all spending time with his grandchildren and great-grandchildren. His greatest accomplishments were retiring from Reda Pump after 32 years of service, and his biggest accomplishment being father, grandfather and great-grandfather. He was preceded in death by his parents Chester and Josephine Whitmire and three sisters Wynona Hogner, Polly Dacy and Agnes Chaney. Chester is survived by his wife Marilyn, one daughter Dana Robinson and husband Cary of Nowata, One son Chance Whitmire and partner Michael McMurtrey of New York, a bonus daughter Genene Cheatham and husband Jeff of LaPine, one grandson Tristan Robinson of Nowata, One granddaughter Cherokee Geeo and husband Dalton of Nowata, with two great grandsons Cooper and Ryder. Three sisters Rebecca Worthington, Ellouise Whitmire of Tulsa, and Euphamia Thompson of Jenks and many dear nieces and nephews. Funeral services will be held Friday, March 18, 2022, at 2 P.M. at First Church of God in Nowata under the direction of Stumpff Funeral Home and Crematory. In lieu of flowers, the family suggests memorial donations, in Sonny's name, be made to Nowata EMS.

The family of Chester "Sonny" Leon Whitmire Jr. created this Life Tributes page to make it easy to share your memories.

Send flowers to the Whitmire family.